A simple drive through the Rif region of Morocco, where all the cannabis is cultivated, confirms that cannabis cultivation has largely declined in the past few years. Yet no such visual observation can confirm the extent of the decline. The cannabis-covered valleys and hillsides reveal that the traditional Kif variety is being quickly replaced by modern hybrids. This gives sense to the fact that the tetrahydrocannabinol (THC) content of the hashish seized in Europe has been increasing in various European countries for years now.

In less than a decade, Morocco reportedly saw cannabis cultivation decrease by 65 percent from an all-time high of 134,000 hectares in 2003, to 47,500 hectares in 2011. But, Moroccan hashish production is very unlikely to have followed the same downward trend, despite officials’ claims that it declined by 75 percent between 2003 and 2011, from 3,080 metric tons to 760 metric tons. In fact, counter narcotics police services in Europe estimate — based on yearly seizures ­ — that production is closer to 2,500 metric tons. 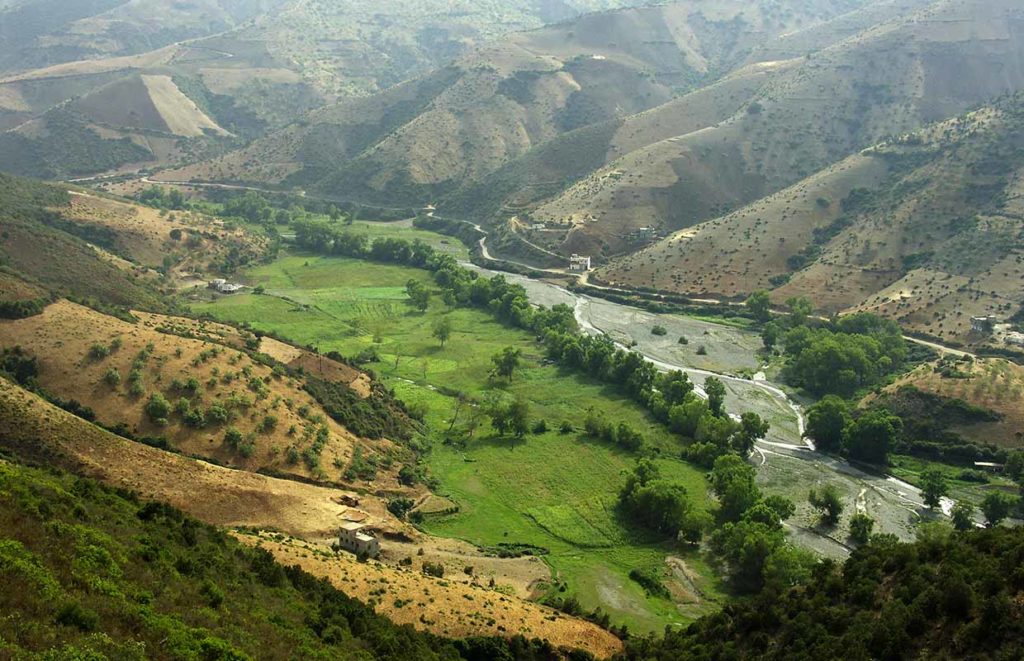 The Rif region of Morocco

During the past few years, counter narcotics police services noticed that the hashish seized in Europe had changed both in shape and potency. They were no longer seizing the 250-gram soap bars, or savonnettes in French, that made most if not all of their intercepts in the 1980s and 1990s. Instead, they were now seizing 200-gram melon-shaped balls, 100-gram tablets and 10-gram olive-shaped pellets.

Visits to cannabis fields and interviews with cannabis cultivators in the Rif in 2013 revealed that the Kif landrace had been largely replaced by new cannabis varieties with radically different physical aspects. The Kif’s sativa features gave way to the indica looks of various new varieties in what seemed to be the vast majority of cannabis fields. While this is only an estimate based on visual observations carried across the Rif, it’s clear that Kif cultivation is quickly receding.

Instead, it seems that out of 10 new varieties mentioned by Moroccan cannabis cultivators, the Khardala variety is now being cultivated across the Rif. All new varieties appear to be hybrids of various origins and pedigrees and it can safely be assumed that the ongoing and massive switch to hybrid varieties is the reason why international hashish seizures seem to invalidate the official hashish production estimates in Morocco.

Cannabis cultivation has undoubtedly declined, but hashish production levels may well have been maintained. According to various cultivators, the new hybrids cultivated in Morocco yield three to five times more hashish than Kif. At this stage very little is known about the nature of the varieties now cultivated in Morocco or about how and by whom the seeds have been introduced in the country. What is known is that the new varieties are hybrids of indicas and sativas with high resin yields and high THC contents. It’s highly likely that the seeds are mostly introduced by foreigners, Moroccan traffickers and, to a lesser extent, by Moroccan growers themselves (those who can travel to and from Spain or The Netherlands, for example). What many cultivators agree upon is that hybrid cultivation is most often undertaken to meet a growing outside demand, as it’s a demand-driven phenomenon.

The fact that cannabis cultivation is diversifying and Kif cultivation is diminishing across most of the Rif was made obvious by the collection of new names given to the Kif variety. The Kif is often called Beldiya (from the Arabic bled: country, countryside, local), Maghribiya (Moroccan), Aadiya (regular) or Kdima Dyalna (our old one).

Previously, the most frequent names given to the Kif were Naanaa (mint) and Aachba (stem, stalk). Some of the hybrids that are now cultivated in the Rif have names that stress their foreign origins: this is the case of the Gaouriya (European in Moroccan slang) and the Romiya (from Romans, the foreigner). A so-called Pakistani variety is called Pakistana, and there is also mention of the Jamaicana, the Mexicana, the marijuana, the Avocat (avocado), and the Hajala (the widow: a feminized variety).

The name Khardala, that of the most widespread variety in the Rif in 2013, means mix or blend. Yet the Khardala is also called Berraniya (the stranger). While it has definite sativa features that make it look like Kif, its indica characteristics are cultivators say it’s full and plump (maamra ou ghlida) and some dislike the taste, the smell and even the effect of its resin (tatkherdel: that drives one crazy). It seems that the Pakistana, an indica-dominant variety, is no longer cultivated in the Rif and that it was replaced by the Khardala, a sativa-dominant variety. Some cultivators estimate that the Gaouriya, a wide and low indica dominant variety with higher yields and higher THC content, is likely to replace the Khardala in the coming years.

The Khardala, a hybrid of unknown pedigree, resembles the Kif but grows wider with definite indica features and qualities. One such feature is its long growth period: it’s sown in April or May and cut in October. That’s much later than the kif, which is sown in February or March and cut in July or August.

The late drying period is a problem. The crops can’t be dried on rooftops after summer has ended and indoor drying spaces are not always available. This can affect the quality of the end product. One hundred kilograms of cut Khardala can reportedly yield up to 7 kilograms of resin the first year, 5 kilograms the second year and 3 kilograms the third year when new seeds need to be purchased. This amounts to potentially high extraction rates: 7 percent the first year and, if the seeds produced the first year are sowed, 5 percent the second year and 3 percent the third year with an average extraction rate of 5 percent over three years. This is much higher than what the Kif could reportedly produce in the early 2000s: 2.8 percent in 2004 and a mere 2 percent in 2005. The switch from Kif to hybrids cultivation has meant that irrigation has become a necessity. While Kif was predominantly cultivated on bour (rain fed), the new varieties must absolutely be grown on irrigated land. The Kif produced less resin but was adapted to the Rif’s dryness and could sustain high levels of water stress. Only 12 percent of cannabis fields were irrigated in 2004 and 20 percent in 2005.

The new hybrid varieties require a lot of water. In a dry country with very little rain, where the lack of sources prevents the traditional flood irrigation in most places, only water tanks and wells make irrigation possible. Countless water tanks dot the cannabis-covered valleys and slopes and wells are dug on a frequent basis and at much deeper depths. As a consequence, irrigation costs have largely increased; not only because well drilling is expensive but also because motor pumps, irrigation hoses and sprinklers are needed.

Most cannabis fields are equipped with sprinklers that are often used at midday, when evaporation is at its highest. Many cannabis growers don’t own enough sprinklers and must move them from place to place across their fields from dawn to dusk. Beyond wasting water, sprinklers also affect the trichomes, the volatile terpenoids and, by consequence, resin production. 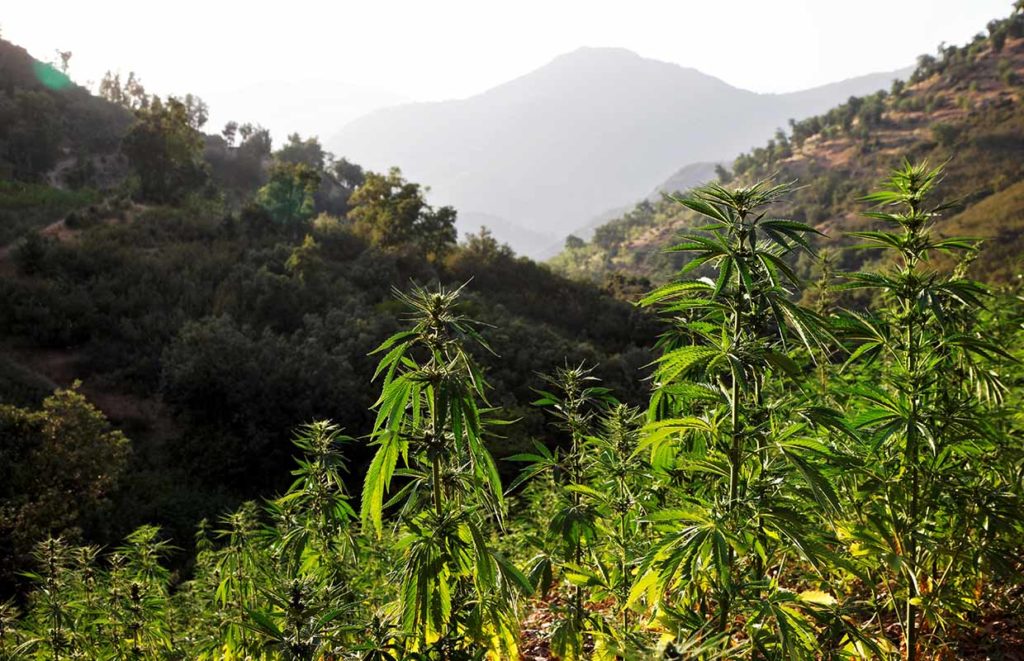 A cannabis field in Morocco

Cannabis cultivation techniques are still very basic in the Rif. None or very little drip or wick irrigation is used although it’s a more efficient use of water. Because broadcast seeding is still widespread and precise seeding – or even better, greenhouse germination – is too rare, chemical fertilizers are used more often than manure. Chemical fertilizers make cannabis plants mature faster, often before resin maturity, and affect the smell and taste of the end product. Khardala cultivation also largely occurs by sowing seeds that were obtained on seeded plants during the previous harvest, something that proves detrimental to hashish yields and that’s clearly inadvisable.

Indeed, since the Khardala variety is a hybrid, it’s not a true-to-type variety that can be safely reproduced from its own seeds, contrary, to some extent, to the Kif landrace/heirloom. Also, since it’s not a feminized variety, female plants often get pollinated either by the rare male plants that inevitably escape manual pulling or through the hermaphroditism phenomenon.

In the end it appears that if the new varieties offer much higher yields than the Kif, the Rif’s full hashish production potential has not yet been reached. Newer varieties and better cultivation techniques can undoubtedly yield higher hashish production. Still, the cultivation of the Khardala variety easily allows for threefold increases compared to what Kif cultivation can produce. In the end, a two-third decline in cannabis cultivation since 2003 is very likely to have been offset by the yield increase allowed by the cultivation of the new hybrids on the vast majority of the actual cannabis surface.

Moroccan cannabis cultivation started declining when new hybrid varieties were introduced in the country. Yet correlation isn’t causality and it doesn’t seem that the cultivation decline is what caused the resort to hybrids. It’s not clear what role forced eradication might have played since it took place outside of the historic cannabis zone of the Central Rif. In any case, forced eradication was stopped in 2011 partly in reaction to the Arab Spring and the 2010 Bab Berred demonstrations. Other factors are more likely to have caused the actual hashish revival in the country. 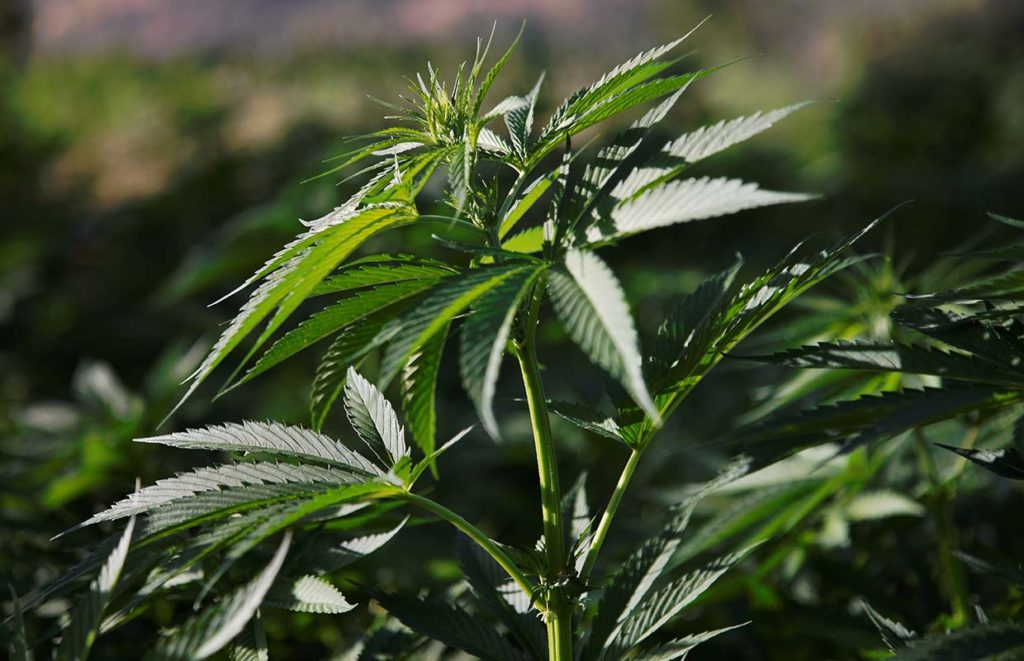 What’s clear is that the Moroccan hashish industry is being modernized with large-scale cultivation of hybrid varieties imported from Europe, most likely both by Moroccan and European growers and traffickers. Moroccan hashish is now much more potent than it used to be and is now sold in Europe in new shapes and sizes. Yet it seems that most of the seized hashish is still cut in the same proportions than before and with the same adulterants.

Such a hashish revival, though, is still unaccounted for by most international and national agencies, whether involved in drug issues or in the economic development of the Rif region. The fact that the massive ongoing switch to hybrid cultivation is largely unknown or unaccounted for is actually a serious issue as it directly questions the economic strategies that are being implemented, in part, to reduce and maybe suppress cannabis cultivation in the Rif. Ignoring or misunderstanding the drivers of the hashish economy as well as its net returns (potentially increased through hybrid cultivation), does not bode well for the success of the important development programs that are underway in the region.

To make things worse, the Rif is an environmentally fragile region that’s one of the poorest and most densely populated in Morocco. The fast increase of cannabis cultivation during the last decades, along with poor soil conservation practices, has taken a heavy toll on the Rif’s forests and fragile ecosystems. While cannabis cultivation has declined in the past 10 years, the switch from the mostly rain-fed Kif to the systematically irrigated new hybrid varieties puts the region’s limited water resources at risk.

The ongoing hashish revival might well be short-lived after all. Ironically, a legalization debate is gaining momentum in Morocco, even reaching the parliament where the use of Kif for medicinal purposes is being discussed. While many say that nothing but Kif can grow in the Rif, or at least that the Kif economy is the only one viable in the Rif, such a debate proves timely. Unless, of course, it’s already too late and the opportunity for the Rif to produce environmentally friendly cannabis derivatives has been lost.

TELL US, do you enjoy hashish?

Wax On: HBC Solvent-Free Wax
Dabbing Essentials: Equipment You Need to Get Started