It feels slightly illicit, we’re in the home-based greenhouse grow with Ed Rosenthal getting ready to bring the male and female ganja plant together. “It’s so cute in here,” says Rosenthal’s longtime editor Angela Bacca as she enters the 4’ by 8’ space that resembles a miniature forest – the 25 plants are no more than 3-4 feet tall. Our tool for today’s activity could also be described as cute, we’re set to use a small pink watercolor paintbrush to dust the pollen from a Juicy Fruit male onto the buds of the Purple Pineapple.

Marijuana is an annual plant that is dioecious, meaning it produces both male and female varieties and sometimes also expresses itself as a single hermaphroditic plant representing both sexes. The flowering female marijuana plant creates the resinous buds we all love and the male plant creates flowers that excrete pollen. To create a new variety of cannabis, we’re cross-breeding strains to create a new seed that will, hopefully, represent the best of both attributes from its parent strains.

Cannabis Now joined in the Guru of Ganja’s never-ending quest to advance horticultural marijuana research and picked up some basic plant pollination techniques along the way.

1. Rosenthal opens a plastic container filled with the flowers and pollen from a male Juicy Fruit plant he harvested in May 2014. If marijuana pollen is kept dry, it can stay active for a few years, he says. 2. Rosenthal overlooks the Purple Pineapple female plants in his greenhouse while choosing which one to pollinate. 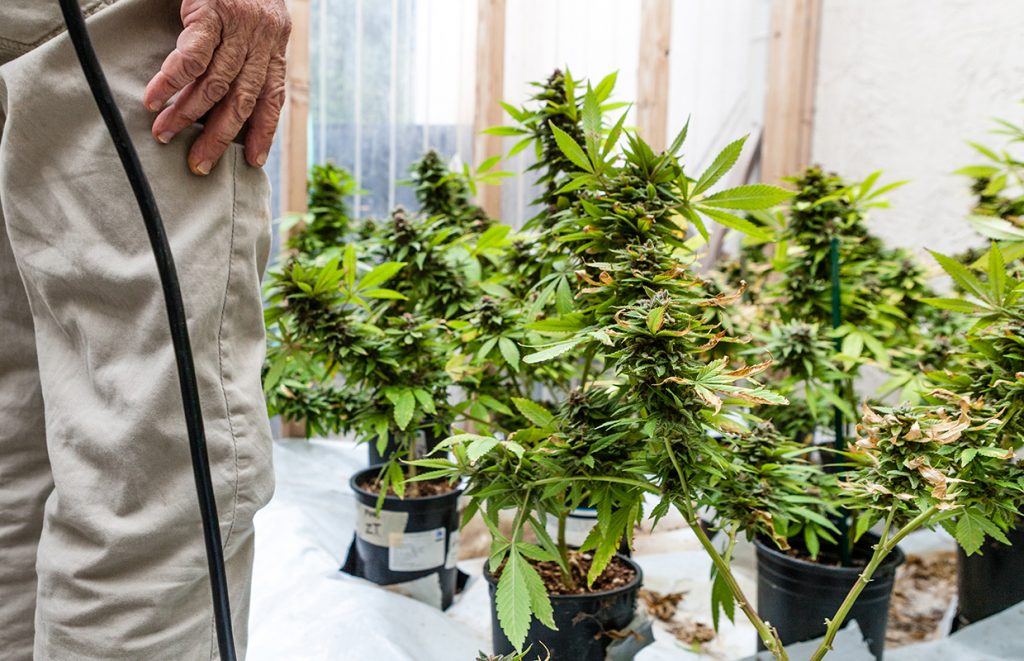 3. Rosenthal inspects the buds of a marijuana plant up close exposing its wick system. With his unique grow set up the plants get all their water and nutrients from the wicks placed at the bottom of their containers. 4. Rosenthal tends to the 25 Purple Pineapple plants in his greenhouse. Like many gardeners, he speaks directly to his plants while he works. While the greenhouse receives light during the daytime hours he has also set up a supplemental lighting system. 5. A small watercolor paintbrush is dipped in the Juicy Fruit male pollen inside Ed Rosenthal’s greenhouse. Rosenthal also grows plumerias and orchids within the enclosure. 6. Pollen separates from the duff and flower of the male marijuana plant. 7. A paintbrush applies the male pollen to the buds of a female cannabis plant. During this stage Rosenthal agitates the marijuana. Remember, he says, this would be traditionally happening by pollen blowing in the wind, there is no need to be too careful. 8. The buds on one branch of the Purple Pineapple strain are covered in male Juicy Fruit pollen. 9. Rosenthal adds an extra coating of pollen to a branch of buds, making sure to thoroughly coat the buds on all sides. 10. Once applied, Rosenthal uses a flicking hand motion to dust off the pollen from the buds. 11. Rosenthal labels the branch that has been pollinated. If the process was successful, the plant should produce seeds in 30 days. You may also like...
Related Topics:Cannabis, Ed Rosenthal, pollination