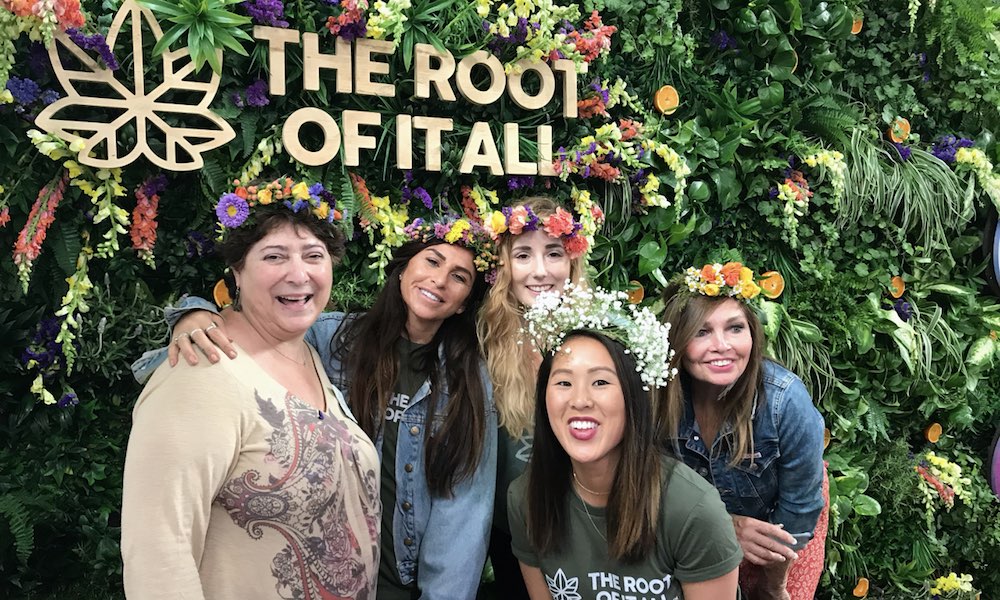 It was a gathering of the cannabis tribes — from cultivators and to distributors, retailers and every angle of the biz you can imagine. The only thing missing were the customers, patients consumers.

This is the world of B2B cannabis, where businesses connect to get their product into the right stores and out to the public. This is how we do it these days. Long gone are the “dealers” and “middlemen” who came up to the grower hidden in the mountains, bought the whole crop and took it to the city to sell ounces and eighths to their circle of friends. Now, it involves setting up distribution contracts, creating manifests, marketing and so much more.

This was the second Hall of Flowers event at the Sonoma County Fairgrounds in Santa Rosa, California. The number of booths doubled from the year before and displays were more elaborate than ever.

While serious business transactions were clearly taking place (and a few dubious ones I spotted, conducted clandestinely out of backpacks and deep pockets), this was not the suit and tie kind of cannabis crowd seen at most large conventions these days. More akin to the Emerald Cup, held at the same venue every December, this had a full-on NorCal mellow, inquisitive and fun vibe. No doubt it had to do with the fact that almost everyone I spoke with was either smoking joints and pipes out in the large, grassy outdoor lounge spaces in the glorious spring sunshine, or else they were micro-dosing edibles throughout the day.

This event was staged for stoners: DJs played music from the bow of a wooden boat, food vendors catered to every kind of munchie craving and comfy bean bags were scattered across the wide lawns. Young women at the Root Of it It All booth, positioned near the entry to one of the two main halls, adorned visitors’ heads with handmade flower wreaths as they spoke about the company’s cannabis-infused tinctures. It was delightful to see vivid color in several of the booths at this show. As corporate cannabis moves into the scene, the overall tones have become more beige and basic at most dispensaries — and in the packaging, as well. So the bright hues at a few booths, such as PLUS edibles and Platinum, were refreshing.

Cruising down the wide aisles with rows of attractive wooden-framed booths on either side, it was instantly obvious that this is now a brand-centric industry. Slick packaging was the name of the game, from the displays in the two commercial Halls, to the Presenters in the separate Speakers Hall — all were focused on some aspect of branding. A few old-time craft farmers from the Emerald Triangle were there, such as Mean Gene of Freeborn Selections, one of the best breeders ever and winner of a first place and second place for Best Flowers at the Emerald Cup. Johnny Casali from Huckleberry Farms, along with other farmers from Flow Kana brands, also made appearances.

But the vast majority of represented brands were from companies and farms founded in the past three years. Instead of the story behind how and where the cannabis is grown and by whom, most stories now are about the birthing of the brand!

One of the more unique tales was from Zachary Cole Fernandez, who in the early morning hours of Jan. 1, 2018, just after the legalization of recreational cannabis in California, climbed up to the famous HOLLYWOOD sign on the hill above the city. His mission was to alter the sign to read “Hollyweed” — which he managed to do. And it actually stayed that way for a little over 24 hours!

He can’t claim it’s his idea, as the same prank had been played twice before, beginning in 1976. Yet Zach used it as a marketing tool. Now he has his own brand, Hollyweed. Like so many others, he came up with a gimmick, a twist, and is trying his luck at carving out a niche in this volatile field. A few will abide — most will explode or implode. One would like to think that only the best quality cannabis flower and products will survive the coming shakeout, yet packaging and branding will clearly be an important factor in what ultimately counts most: sales.

Then there’s the swag. Now that’s a concept that has exploded in the cannabis world. Everyone has lots of great swag. Most conventions will offer plenty of goodies, but we aren’t just talking ballpoint pens and lighters here. Companies with booths were allowed to pass out samples for free (as long as they did not have any cannabis in them), such as flavored gummies to give the idea of the real deal’s taste and texture.

In order to give out actual cannabis samples, the deal worked out with the Bureau of Cannabis Control (BCC) was that visitors to a booth could be given a numbered “sample card” to take to the “Show Grow Dispensary” on site. There, they can redeem the card for tasty samples of actual cannabis products (pre-rolls, vape cartridges, flowers, edibles and more), at a cost of $2 per sample. People gathered up sample cards from many booths, but when they went to redeem them, the Show Dispensary was not prepared for such an onslaught because everyone waited until the end of the second day. Some people stood in line for over two hours to get their samples, but the dispensary the authorities decided to just shut it down.

Yes, people were upset, but since they were all so high, no one complained very much, really. I can’t even imagine what would have happened if they had all been drinking.

“It’s been a tough year for us all, lots of suffering, so this is a real celebration of the survivors,” said Jim Lewi of Red Light Management. Like many of us, he’s seen the rise and fall of cannabis in California and hopes that now we will witness a new ascension. It’s just a different mountain, with a whole lot of new climbers.

“This is the best place to do biz,” commented several people, both for the businesses running the booths as well as the entrepreneurs there to discuss future collaborations. It was definitely a pleasant experience: Meet some people, do some negotiating, go outside and have a smoke and a snack in the sun or under the trees, and return for another round of making connections. Not a bad way to do business at all!

After a last lap around the displays, I was ready for a safety meeting myself. I headed out to the lounging area on the lawn and got cozy with Swami to smoke a fatty. “Cannabis can take you wherever you want to go,” he philosophized. This magical plant has gotten us to a new reality, and even though we all complain about the difficult hoops and hurdles we need to jump through and over as we learn how to do this legally, it is a worthwhile journey.

Hopefully, we will retain a sense of wonder and enjoyment as we do our business together. Cannabis is the glue that holds it all together and the lubricant that makes it all work!

TELL US, did you get the chance to attend the Hall of Flowers?