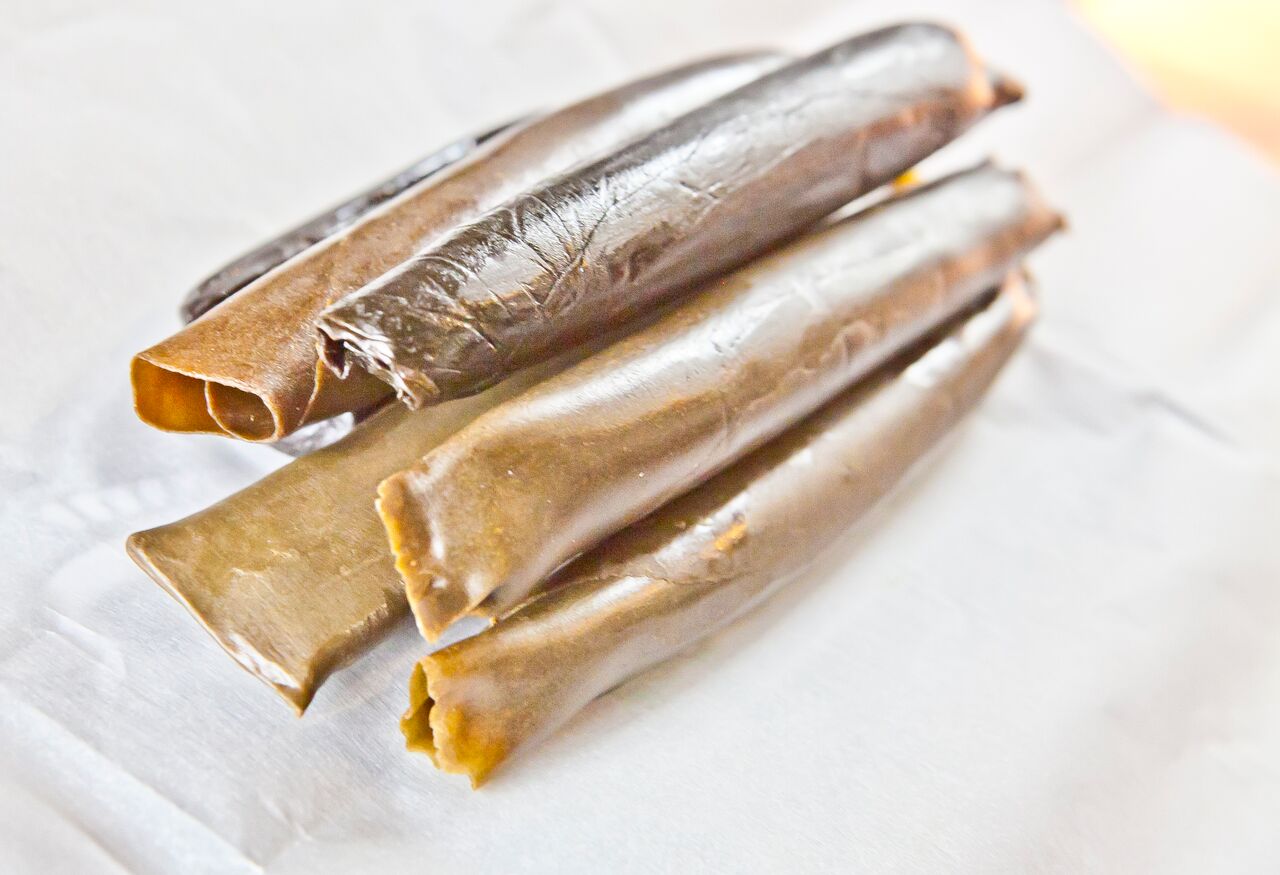 Against the backdrop of the often-forgotten industrial area of West Oakland, the Gathering of Pied Pipers is taking place. As the party is hosted in a larger artists’ enclave, dabbing is limited to a shipping container within the massive space that also plays host to live glassblowing demonstrations. Inside the crowded container, I spot master hashishin Frenchy Cannoli amidst a gathering of e-nails and heady selections. At an event featuring choice products from the most innovative extract artists in the Bay Area, meeting the man who uses traditional techniques to elevate hash into artisanal realms is an absolute treat.

“Frenchy, I’ve been looking for you,” I say.

“Of course, you find me at this hash party,” he responds with his French accent in a way that speaks of destiny. Once I find myself chatting with the man who has traveled the world learning the techniques of hash, he invites his protégé, The Dank Duchess, to take me through a wide selection of his pressed offerings – Blackberry Kush, a Pure Kush, Royal Kush cross and one called Cuvee. All are full-bodied, incredible choices and I’m tasting each out of a hash pipe in a sea of dab rigs.

“When you look at Frenchy’s hash, it looks creamy and buttery and you can imagine it tasting like that,” Duchess says with an excitement that belies a true passion. “And when you smoke it, one of the things I like about it is, there’s a full coating of your mouth before it goes down and comes back up.”

The Blackberry Kush, she says, tastes of sweet blueberries in the beginning, finishing with a Diesel and “just a bit of pine.” Mendocino genetics have a tendency to taste of pine, she says.

Frenchy is the official hashishin of Aficionado, a boutique seed company based in Mendocino County, California. To find Aficionado, Frenchy first traveled through the hash-making regions of the world – never staying in one place for too long, always seeking the best of what the region could provide.  He found that at the House of Aficionado.

“The way we work together is a little bit like a winemaker works with a vineyard,” he says.

Frenchy explains that to get the highest quality of material to work with, one must seek out the regions with ideal growing conditions. Like those in the wine industry, he’s looking for a unique terrior – the geography, geology and climate of a certain place interacting with the genetics of the plant grown there.

To craft his signature cannolis, Frenchy uses an ice-water technique to sieve and collect the trichomes from the dankest offerings out of Aficionado’s gene pool. While others within the select club of California artisanal hash makers stop there, ending with mouth-watering selections of ice-water hash, Frenchy continues in his process and presses the resin heads.

Videos of his technique on YouTube, show him meticulously rubbing a jar warmed with hot water over the resin he has collected. Frenchy also cures his hash, for the purpose of eliminating humidity and increasing its longevity.

“In the beginning when I started to show my hash here I had a hard time getting it out, because people wanted the resin, but they wanted it not pressed and I wouldn’t do not pressed,” he says of the technique that he describes as similar to a winemaker pressing grapes. “And then with age, it’s changed. It gets a body and it gets smooth. Normally when you smoke a piece of hash the taste builds up slowly in your mouth. When you drink an aged wine, it takes [over] your mouth. It’s like ‘Wow!’ But you don’t see it come because it’s super smooth.”

As a hashishin, he follows the traditional methods of hash making. He teaches seminars, takes on consulting work and has written about the origins of concentrates for “Weed World” magazine. He is also working on a book called “The Lost Art of the Hashishin.” The Dank Duchess has become his protégé in all things and writes articles about the experience of smoking Frenchy’s selections. Both have risen from relative obscurity within the cannabis community to virtual superstars in a short time through incredible products combined with social media and marketing savvy.

We’ve reconvened with Frenchy for an interview at the Green Door, a San Francisco dispensary featuring an open lounge that allows smoking, including dabs and, in our case, Frenchy Cannoli’s hashish. The lounge has just opened and is relatively empty so when Frenchy snaps one of his cannolis to show off its center it makes an astounding crack.

The selection of LA Affie OG tastes incredible. As it has been pressed and aged, like a fine wine, the flavor coats the mouth.

“I believe that pressing brings something to the game,” he says of the technique used by traditional hash makers. “You have to think that sieving is one of the oldest ways for humanity to separate the grain and chaff, which was one of the basic food sources two million years ago when we moved from Africa. There is hardcore archaeological evidence that shows that in Africa, we were sieving 100,000 years ago. It’s something that has been done for many types of products.”

Frenchy’s hash is limited and available in select locations throughout California. This works with the marketing aim of the product, to highlight Aficiando’s genetics and cultivate a premium, localized brand. Aficinado, organizers of the Northern California-based Emerald Cup say, “is possibly the first seed company positioning its marketing strategy and the quality control of its breeding program on hashish.”

“When you go to a dispensary and you show the flower and you show the resin that is growing on that flower, the guy is not going to look at your flower the same way,” Frenchy says of the arrangement. “If you sell a package that brings credit to the person that gave you that resin, the game changes.”

Looking forward to legalization in the Golden State within the next year, the hashishin understands the power of establishing standards in terms of quality control. He’s working with the Emerald Growers Association to create a hash makers association. This organization could, in turn, embark on the harder task of defining what premium artisanal California hash means. Then, he says, standards of quality could be set across the board. Frenchy compares the impact that cannabis cultivated in Northern California could have to Champagne from the region Champagne, France versus sparkling wine made elsewhere.

With quality standards in place, all premium hash would then be able to be sold to a dispensary for a fair price. A dispensary offering anything less is insulting to not only the hash maker, but also the grower, Frenchy says.

“That’s why for us the first fight is to protect the land,” he says. “When you have a little piece of land in the place that is the origin of the best product on the planet you don’t sell that piece of land. Because you are a brand name, you become a domaine.”

Duchess, who moved to California with her husband Nick roughly a year ago to pursue careers in the cannabis industry, had never really seen hash beyond a few grains before she met Frenchy.

“Being in Florida, I’d never seen anything big and he had huge logs of shiny cannabis,” she says of their first encounter with her future teacher.

When she asked Frenchy out for coffee a few days later, he saw her spark.

“A couple of days later he asked if I wanted to write about cannabis and write about hash and establish a vocabulary about hash,” she says. “And then he said, well, if I’m going to do that then I have to teach you how to make hash.”

New to cannabis as an industry, Duchess drew from her background in social media marketing, cultivated in Miami Beach.

“Instagram is where it’s all happening,” she explains. “That’s how you see the ups and downs and the trends and one thing that you will notice on Instagram is that every school of thought has its own way about speaking about hash. So, Nikka T and the Colorado school talks about solventless, Matt Rize talks about ice wax, Norcal does not want to talk about ice wax, still calls it bubble. Everyone wants to say, well this is greasy, this is oily, this is terpy, this is live. Now rosin has come into it. So, right now we’re all speaking a slightly different language.”

For Frenchy, the hash makers association, will help establish a standardized vocabulary and a quality control standard for the industry. In this way the region of Mendocino County will rise, crafting a boutique product in one of the world’s most renown cannabis growing regions.

“The wine industry is 10,000 years old, but the real history of good wine, it’s not even 200. Everything else has been an incredible marketing campaign,” says Frenchy. “But from this, you can understand the importance of the soil, connected with the climate, the water source, the genetics and the role of of the people.”