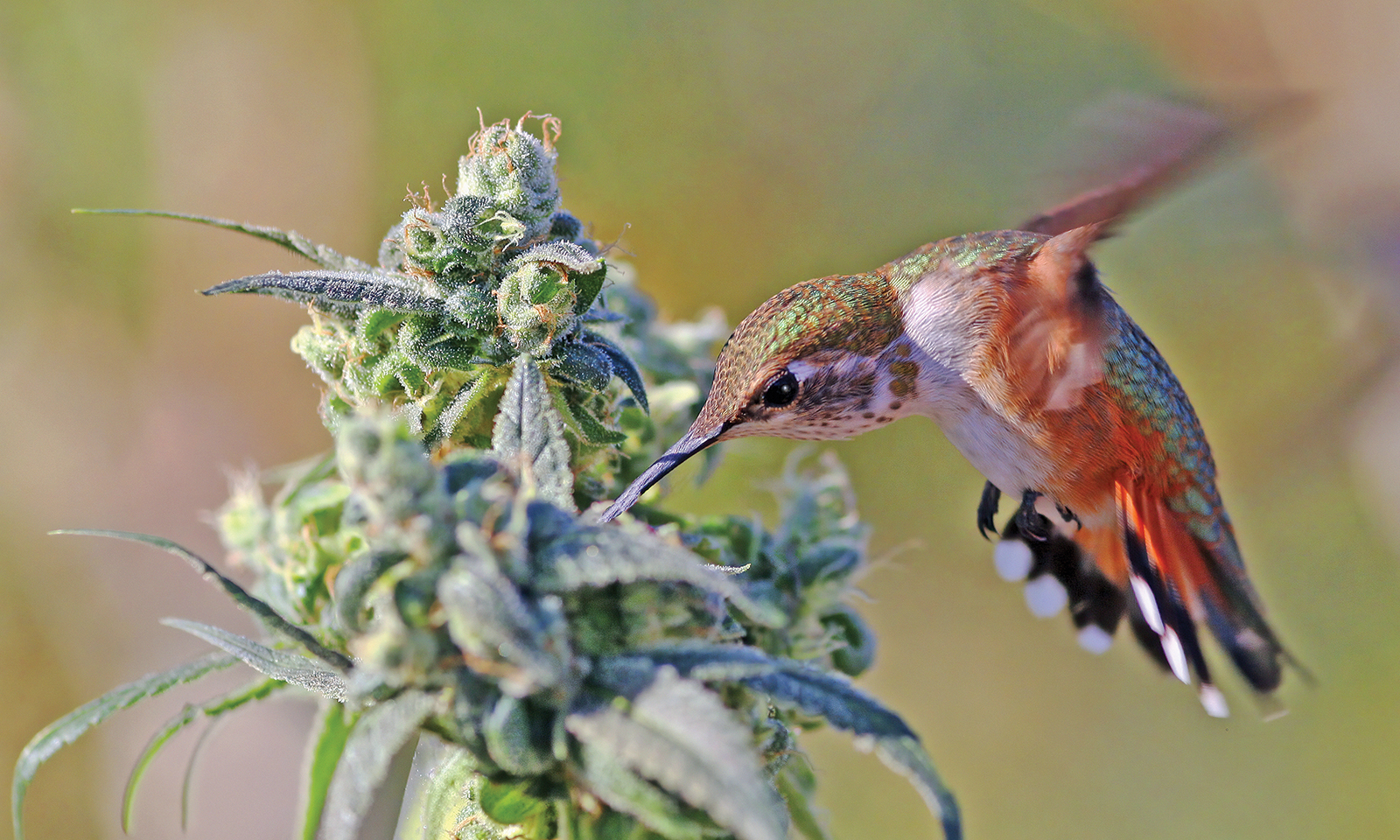 Cannabis on the Wings of a Bird

Immediate apologies to all magical dreamers, but the delicate hummingbirds flying near the flowering outdoor cannabis in Jeff Scheetz’s photographs are not attracted to the plants. Instead, Scheetz captures these tiny creatures after hours of observation, armed with a hummingbird feeder, a comfortable chair and a wildflower patch near the cannabis grow at his home in Northern California.

“It takes years of trial and error and tons of patience,” Scheetz says of the process behind his hummingbird and cannabis series.

Scheetz, also known as DoobieDuck, was an avid hunter and big game guide before chronic pain associated with three major spinal surgeries forced him to find his passion closer to home. Nowadays, he sets out to photograph the tiny hovering birds, but admits he’s lost more than a few shots by dozing off in his chair during a two-hour session.

“I set up a tripod with a remote shutter release connected to the camera and manually focus my lens on a single small area where I’d like to capture the bird as it hovers or flies by,” he says. “Then I wait! When I judge them to be in that exact area, I close the shutter. Keep in mind if you are going to try this: They are fast and furious. It is difficult. The wait can be hours and the images can be far from good or in focus.”

Scheetz’s images combine cannabis photography with wildlife photography and, in this way, help bring the art of documenting marijuana out of underground culture and into more conventional conversations. But the melding of cannabis and birds wasn’t Scheetz’s invention.

Academic research shows birds may have been one of the key factors towards spreading the plant around the world, as they carried cannabis seeds to other continents through their droppings. In addition, hemp seed was once commonly used as wild birdseed before hemp — a type of cannabis that’s defined as having less than 0.3 percent of marijuana’s main psychoactive cannabinoid THC — became illegal to grow in the U.S. in the 1970s.

So, while it’s true that the hummingbirds Scheetz photographs in motion near equally beautiful cannabis flowers aren’t seeking out the plant directly, the images stand as part of a long history of the special relationship between cannabis and birds.

Robert Clarke and Mark Merlin, in their book “Cannabis: Evolution and Ethnobotany,” explain that cannabis and birds first cross paths in Taoist literature dating back to the fourth century BCE. In an ancient Taoist legend, a deity named Ma Gu — which translates to “Auntie Hemp,” “Hemp Damsel” or “Hemp Lady” — was associated with the elixir of life and the protector of females, and was said to have “hands that looked like the claws of a bird.”

Hemp has been cultivated in China for millennia as fiber, food and medicine. Not accidentally, according to Clark and Merlin’s book, Ma Gu is also the goddess of the Chinese mountain Tai Shan, which is located near the present-day, hemp-producing cities of Dong Ping and Laiwu.

“Today, its slopes support populations of feral hemp said to result from pilgrims tossing hemp seed from the summit while asking Ma Gu for health and longevity,” the book reads.

Because of Ma Gu’s birdlike claws, she is also associated with sparrows, considered “archaic shamanic spirit helpers called má niao or ‘hemp bird,’ because they feed on hemp seeds,” the book explains.

Sparrows are also important in the history of hemp because they are one of the species of bird identified with carrying hemp seeds through their digestive tracts from one area to another.

The book reads: “These references regarding the dispersal of seeds by birds raise the possibility that long-range avian transport carried cannabis out of Central Asia into Europe, China and South Asia prior to human dispersal.”

The connections between birds and cannabis continue to the modern era, primarily through the use of hemp seeds in birdseed. According to the book “Feeding Wild Birds in America,” hemp seed was a popular feed for pet birds in the late 1800s and early 1900s.

“Widely available at feed and grain stores, [hemp] was quickly adopted by wild bird feeding proponents and became an ingredient of wild birdseed mixes,” the book explains. “Bird-feeding literature through the middle of the 20th century extolled the goodness of feeding hemp and even growing it for wild birds. Then, the mention of the seed nearly disappeared from the literature.”

The book explains that hemp seed was valued for both its nutritional value, but also for the fact that it was easy to acquire. All that changed when the Controlled Substances Act of 1970 declared all cannabis varieties, including hemp, illegal as a Schedule I substance. With the 2018 Farm Bill, industrial hemp has once again been legalized and looks to be regulated like an agricultural commodity rather than a controlled substance. This might mean that hemp seeds could find their way back into the hearts and minds of bird watchers and nature lovers in the near future.

Scheetz, who is now 64, started his career as a photographer after taking a class in high school and says he got his name from friends because he was an avid duck hunter who smoked doobies. When he sets out to take a hummingbird image, he captures as many as 200 shots in a two-hour period and then looks for something “truly unique or special with just the right flicker of lighting and good focus.”

“I love all types of photography and wildlife photography is my favorite,” he says. “After becoming disabled in 1996, I could no longer travel to the areas I needed to in order to shoot wildlife, so my wife and I found a rural area with wildlife in it. I found I could capture cannabis buds and flowers, macro cannabis images and the hummingbirds around my home at my own pace. We see mule deer, foxes, birds of prey and many more animals from our front windows daily — and a gorgeous sunset or sunrise always gets me up from my chair to break out the camera.”

Perched in his Northern California garden, Scheetz has become just another animal in his habitat, both attracted to the beauty around him and contributing to its bounty — in his case, by continuing to foster the connection between birds and weed.

TELL US, how do you incorporate cannabis into your hobbies?

You may also like...
Related Topics:Cannabis, cannabis prohibition, Hemp, In The Magazine, Issue 36, Jeff Scheetz, photography