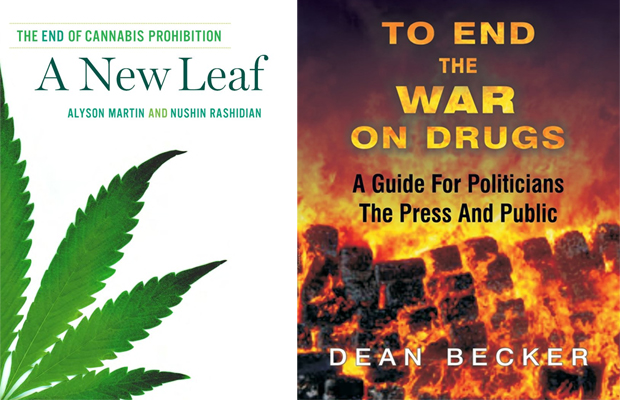 It is somewhat strange and ironic to me to really be sitting in prison for federal marijuana charges in Colorado—the first state to legalize adult use of cannabis.

Friends have mailed me books to read here in prison, in particular A New Leaf: The End of Cannabis Prohibition by Alison Martin and Nushin Rashidian and The End of the War on Drugs: A Guide For Politicians, the Press and Public by Dean Becker.

Martin and Rashidian did a very good job of explaining the struggle behind the legalization initiatives in Washington and Colorado. While they covered the history of the medical marijuana movement and featured such notable heroes as Dennis Peron and Valerie Corral, they stuck mostly to the battles in Washington and Colorado. Although I found the in-depth explanation of these fights to be intriguing, I cannot express how disappointed I was to get the full story of all the in fighting among so many of my friends and fellow activists on the outside.

This is and for a long time has been an issue I find disheartening and just plain wrong—I guess it’s the old “house divided” thing. At some point we must put our differences behind us, unite and continue this battle to reestablish our rights once and for all.

That said, this was a wonderful read and was well researched and written telling the story of the last several years in the two states and the struggle to gain legalization. I applaud this in-depth look at history as it unfolds before us.

As for Becker’s The End of the War on Drugs—I loved this book. Becker did a wonderful job of presenting a cross section of interviews covering so many different categories of people: doctors, lawyers, law enforcement, judges, news reporters, politicians, and of course, the many heroes and warriors who have fought this battle for so many years.

It gave so many varied views all a fair chance to express their thoughts and feelings about this subject that is so dear to us all. For or against, this is a war that our government is fighting against its own citizens.

Through Becker’s in-depth interviews, he shows many of the true and touching stories that have led us to fight so long and hard for our right to care for ourselves as we see fit. The joy of reading this great book is that it shows we have passed the tipping point and are on the way to full acceptance of this the most useful of all plants.

While there were many wonderful stories, views, and opinions expressed in both of these wonderful books, there was one person left out of both—the late, great Jack Herer.

Jack spent a lifetime dedicated to this plant and the legalization movement. He spent his own money and tens of thousands of hours traveling all over this great nation and world to spread the word of all the many virtues of this plant. Jack was the moving force behind the beginning efforts to legalize in Washington, Oregon, Alaska, California and many other states. He is the grandfather of this movement and with the help of so many others got us where we are today.

Legalizing marijuana and ending prohibition is the right thing to do.

The prohibition of anything has proven to be a way for the underworld to rise to wealth and power while the poor and oppressed end up in prison. I ask myself often, “What the hell am I doing in here?!”

Just a few miles from here persons over 21 years of age are selling, smoking and using the sacred herb yet here I sit five years into my ten-year mandatory minimum sentence having broken no laws in the state I lived in, California, the home of the first medical marijuana laws.

I can only shake my head and pray that the powers that be will one day soon fix what we all know to be broken. At some point they must admit their mistakes and release those so unjustly imprisoned.

If your actions can help change this and send us home, please do so as soon as you can. The war will not truly be over until those sitting in prison are returned to their lives outside.

Will you help push for cannabis policy reform and the release of non-violent marijuana prisoners? Tell us in the comments below!