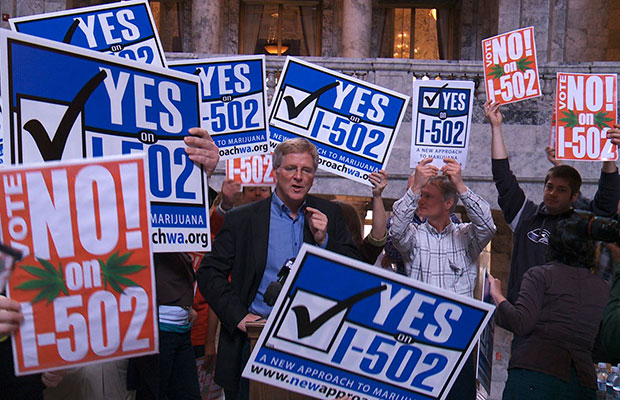 A documentary by Riley Morton and Nils Cowan.

“Evergreen: The Road to Legalization” follows the I-502 campaign, which made Washington the first state to legalize cannabis for recreational use, for an entire year prior to the 2012 election.

From the very beginning, when ACLU attorney and campaign director Alison Holcomb files the signatures to submit the initiative, the campaign is marred by controversy. Both groups, the “Yes” on I-502 and “No” on I-502 campaigns, considered themselves pro-marijuana, complicating the campaign for all those involved.

At heart of the debate on I-502 is the “stoned driving” provision and those who fear that medical patients would be forced to either purchase their medicine from recreational stores at high personal costs or remain on the black market.

Here is where the concept of a difference between “medical” marijuana and “recreational” marijuana begins, on the road to legalization. The filmmakers chose not to explore the concept and divisions it creates, but rather to observe it. Morton and Cowan are true reporters and weave together every underlying issue at the heart of the campaign flawlessly.

Holcomb, defending the initiative, says the point was to pass the law to push the federal government and that in order to succeed the initiative had to “meet the voters where they were,” she claimed, citing anti-marijuana sentiments in the majority of eastern Washington state.

“It’s hard to argue with the way they did it because it worked,” says Josh Berman, founder of 4Evergreen Group.

“[Twenty years ago] legalization seemed so far off in the distance it wasn’t really relevant,” says veteran activist Vivian McPeak.

McPeak is the founder of the world-famous “protestival” Seattle Hempfest, which in 2012 was the scene of heated debate over the legalization initiative. McPeak explains that until this point everyone agreed on legalization and now that legalization is here the devil is in the details.

Evergreen does an incredible job of not taking a point of view, but beautifully telling the story of Washington state’s journey to legalization, punctuated with sweeping views of Washington’s trademark evergreen forests and magnificent shots of Seattle.

The documentarians’ choice not to insert themselves in the narrative was wise, as it allows the viewer to draw their own conclusions and to learn their own lessons, for better or for worse.

As more states follow Washington and Colorado’s lead, it would be wise to examine the issues at heart of “Evergreen: The Road to Legalization.” What provisions will be added to appease the portions of the public who are uneducated about marijuana? Will medical marijuana patients get lost in the shuffle?

For now, one thing is clear. Legalization is here, and the roads leading out of Denver and Seattle only lead to more uphill battles and infighting, but ultimately we are entering a new era.

“The fact that legalization passed in such a tumultuous way just felt so unnecessary,” concludes Berman.