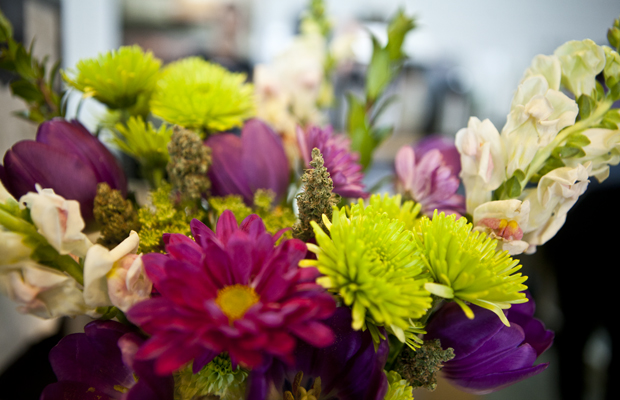 Guests of both genders may join in the clamor during a wedding bouquet toss featuring the floral arrangements of Buds and Blossoms. The Colorado-based florist has been catering to cannabis lovers joining themselves in matrimony for the past six months.

“Some people don’t want [cannabis] in [a guest’s] face and some people say ‘Heck yeah, let’s put it everywhere,’” owner Bec Koop said of the business which crafts both cannabis studded bouquets and “budonnieres.”

Koop grew up in her family’s flower shop and started her own floral business several years ago.  She also works as a budtendress at High Country Healing dispensary in Alma, Colo.

“I look at cannabis all day long and then in my off time I play with flowers,” Koop said of her idea to fuse her two interests and offer an interesting twist to the wedding industry.

Those wishing to utilize Buds and Blossoms services travel to a dispensary to choose the cannabis they would like featured in their wedding. Strains that brides and grooms choose can form mixed bouquets of their favorite strains.

“Then it’s kind of his and her tastebuds,” Koop said.

Koop eyes the strains using a florist’s flare and forms arrangements that compliment the traditional flowers they are grouped with. In addition to smokable herb, some of her arrangements, such as a bouquet she calls the wild child, also feature cannabis leaves.

Nugs that are bright green or dark purple “really tend to go well with a lot of different flowers that people like,” she said.

While cut flowers will eventually wilt and die, the cannabis featured in Koop’s arrangements can easily be removed and savored immediately.

“They can put it straight from bouquet to bowl,” she said.

On the other hand, the wedding cannabis can also be saved as a remembrance and smoked by the couple together at a future date, such as the anniversary of their first month of marriage (the tradition waiting a year to enjoy the wedding cake may just be too far off).

“It’s almost like a wedding favor is the way that a lot of people like to treat it,” Koop said.

Some venues in Colorado are comfortable with guests possessing and smoking cannabis on site, while others are opening up to the idea of having a private bus or limo parked on site for smoking purposes, Koop said.

Although she would like to feature a couple’s homegrown herb, for now, Koop requires a receipt of purchase for the cannabis to craft cannabis bouquets.

Would you feature a marijuana bouquet in your wedding? Tell us in the comments below.