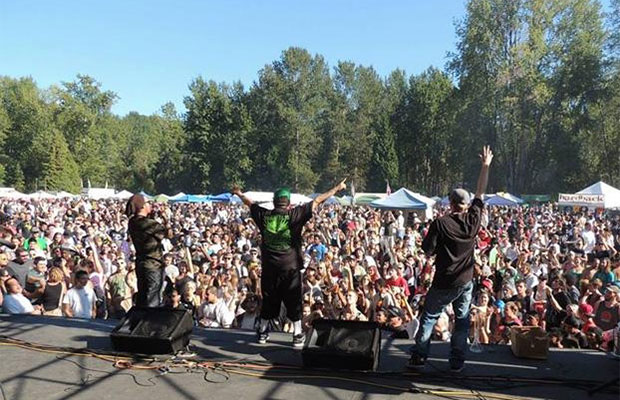 After 10 years of attracting thousands of people and generating immense amounts of local revenue while at the same time boosting the local economy, the City of Portland has taken a stance against the longest running annual pro-cannabis protestival in Oregon, Hempstalk, and its use of local land.

In 2013, Hempstalk attracted an estimated 80,000 people to Portland. There were many logistical issues that had to be overcome for the event to run smoothly and lessons were learned in 2013; a decade of growth has led to the overcrowding at the festival’s location at Kelly Point Park in northwest Portland, and it will need to relocate for the 10th anniversary.

When the Hempstalk founders applied for the 10th anniversary permit, they sought to utilize Tom McCall Waterfront Park in Downtown Portland as the venue.

However, in a shocking move, the Portland Bureau of Parks and Recreation denied the request. City officials claimed the festival posed “an unreasonable risk to public safety and public health and to the physical integrity of the park.”

Paul Stanford, founder of Portland Hempstalk and the Hemp and Cannabis Foundation (THCF), responded by saying the denial was “outrageous.”

Hempstalk founders, board members and supporters converged on Portland City Council to appeal the permit ruling where, after much discussion, Hempstalk earned the blessing and support of Portland Mayor Charlie Hales when he said, “It seems to me, that the place it ought to take place is Waterfront Park; if the event is manageable.”

“It’s the closet thing to a win, without being a win,” said local advocate and radio host Scott Gordon, aka Urb Thrasher, “What we have is the mayor’s support, and that means quite a lot.”

Scott, who is also involved with the event’s planning committee, went on to say Parks and Recreation is limited to only six large events (50,000 or more attendees) a year at the Waterfront, and that they were already booked. According to Gordon, at the meeting Mayor Hales demanded they accommodate the annual festival by creating a seventh spot for such a large attraction, at which time Stanford can reapply for the festival’s required permits.

“We were only briefly denied, and now Hempstalk can be downtown like events such as Beerfest and Bluesfest. It will also help save on overhead costs of hosting the event, which will make it that much better not having to spend on shuttles, golf carts etc. Now the ball is in Parks and Rec’s court,” Scott added.

You may also like...
Related Topics:Cannabis, festival, Hemp, Oregon, portland