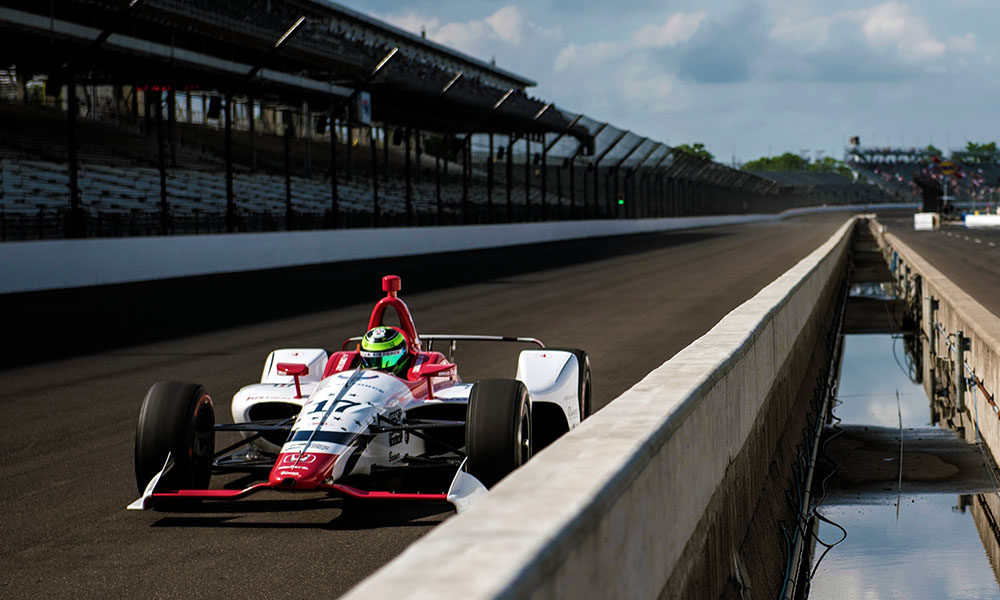 IndyCar fans may notice during the Indianapolis 500 that the racing scene is starting to embrace marijuana. No, it’s not like racing officials issued a statement or anything saying that it is now perfectly acceptable for drivers to get blasted out of their minds before mashing down the throttle of an open-wheel racer and launching into speeds of up to 220 mph. Much like every other sport in the nation, IndyCar is taking baby steps toward the cannabis industry. Well, actually, it is only taking its money. A couple of cars set to battle it out at the Indianapolis Motor Speedway this weekend have been sponsored by a company that produces a CBD-infused product.

The agreement puts the brand’s name and logo on cars driven by James Hinchliffe (5) and Marcus Ericsson (7) in the same way that it might Coors Light or even Chevrolet. The presence of a CBD company in IndyCar is of great significance, considering that neither the cannabis industry nor the sporting world has had this opportunity in the past. CBD’s connection to marijuana has just made sponsorships like this one too risky to even entertain.

But progress is being made.

Other CBD companies are teaming up with racing outfits, as well. A deal was just made between a CBD extraction firm by the name of Liquid Gold Processing and Jonathan Byrd’s Racing. And earlier this year, a car driven in the Circuit of the Americas was sponsored by a CBD wellness company called Craft 1861. So while the latest deal is not the first time ever that racers have raised funds from CBD sources, it is the first time that CBD products will be represented in the Indy 500.

It is a partnership that we’re only going to see more of, says said Jon Flack, president of Arrow Schmidt Peterson Motorsports, especially as more racing teams struggle to find traditional sponsorships. And they are struggling indeed. Some teams that entered the qualifier didn’t even have a sponsor. So, there is room for a beautiful working-relationship to flourish between these two domains.

But there are still plenty of rules that must be adhered to for these CBD sponsorships to fly. The basics are: All of the marketing and advertising must clear federal, state and local laws. The CBD products must be derived from hemp and not marijuana. Any connection to the cannabis plant automatically disqualifies the sponsorship. The product must also fall in line with policies established by NBC. So, sports drinks might seem harmless enough to the network, but maybe it wouldn’t be so open to a company that manufactures CBD vapes. There is also a bunch of other legal jargon that strips IndyCar from any liability as a result of the CBD sponsorship.

Both IndyCar and NBC signed off on the DEFY sponsorship. There is speculation that they may have had an easier time with this particular product because it does not contain any THC. Although CBD is revered for being a non-intoxicating, therapeutic compound, most products still contain trace amounts of THC. Terrell says that his company uses a process that eliminates the stoner component altogether.

But now for the kicker.

Although all of the corporate big wigs are cool with racing teams accepting money from CBD companies, using the substance can still get drivers disqualified from the race. As of now, CBD is still on IndyCar’s banned substances list. This means if either Hinchliffe or Ericsson wins on Saturday, don’t expect to see them chugging down DEFY on camera or even in public. It’s not going to happen.

Eliminating CBD from IndyCar’s drug list is something that is being discussed. And if that happens, watch out. Flack, who was also part of the team that recently helped to lift sponsorship restrictions on spirits, says that’s when the real sponsorship potential from CBD could be realized.

“I won’t be surprised that behind this announcement, you’ll see a significant flooding of investment from that category into the sport,” Flack said. “It’s legal, there’s nothing not legal about it and there’s a lot of education to do. Even though our drivers really can’t consume the product today, this platform will spark the discussion for that and we really embrace that.”

TELL US, do you watch car racing?