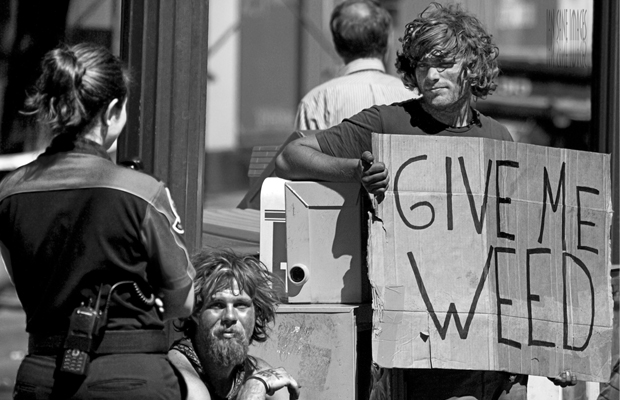 It is no big secret that the War on Poverty has somehow turned into a War on the Poor. The 2012 Census offered staggering numbers that suggested 46.5 million people live in poverty in the United States alone. The cost of living in poverty is hard to measure in its entirety, but by looking at some of the general aspects of poverty it is easy to see why the poor can’t really afford not to smoke marijuana.

Just to examine one side effect or cost of being poor, take into consideration the correlation between poverty and anxiety. General Anxiety Disorder (GAD) is a pretty common diagnosis among the poor. Poverty? Cause stress? Who would have thought it?

How is poverty-induced anxiety treated in the United States? Currently the US spends some $42 billion dollars a year on anxiety treatments out of the $732 billion spent on healthcare plans like Medicaid, Medicare and CHIP. That’s more than 5% of all healthcare costs. Generally, if you are poor enough to qualify for Medicaid, you might get a prescription for Xanax, or more likely, the generic version, Alprazolam. Depending on the Medicaid plan you are on, you may pay nothing for this or you may pay a few dollars. But this doesn’t accurately measure the real cost of Xanax.

Xanax is highly addictive, so much so that most medical professionals only suggest patients take it for 1-2 weeks. Xanax can also do serious damage to your liver. In light of all this information, wouldn’t it make more sense to simply take a toke as needed?

Cannabis, if grown at home, provides no value to anyone but the person who uses it. Xanax on the other hand creates job security for doctors, pharmaceutical companies, insurance companies, and everyone involved down the line. If the poor could simply grow their own plants, their total cost would come in the form of a water bill and maybe the electricity used to power a grow light.

Less than a year ago Janine Dennis Cook, Ph.D published a study that indicated Alprazolam was the 9th most prescribed drug in the United States over a 10 year period. Hydrocodone w/APAP filled the number one spot. The study also offered that the cost of Xanax was $.20-.38 per pill, but since the rate of tolerance reaches its peak in about 6-8 weeks, the actual cost goes up significantly, along with the dosage levels.

A bit of self-reliance in the form of organic food and cultivation of personal cannabis plants for medical use by the poor might actually go a long way toward releasing them from the binds of poverty, hence the real issue at hand. There are several entities that benefit from the criminalization of marijuana; the poor simply aren’t one of them.

You may also like...
Related Topics:Cannabis, medical marijuana, Poverty

Legal Sales in Colorado: It’s Time for the Federal Government to Allow the Free Market to Control Cannabis
Arguments for On Site Consumption