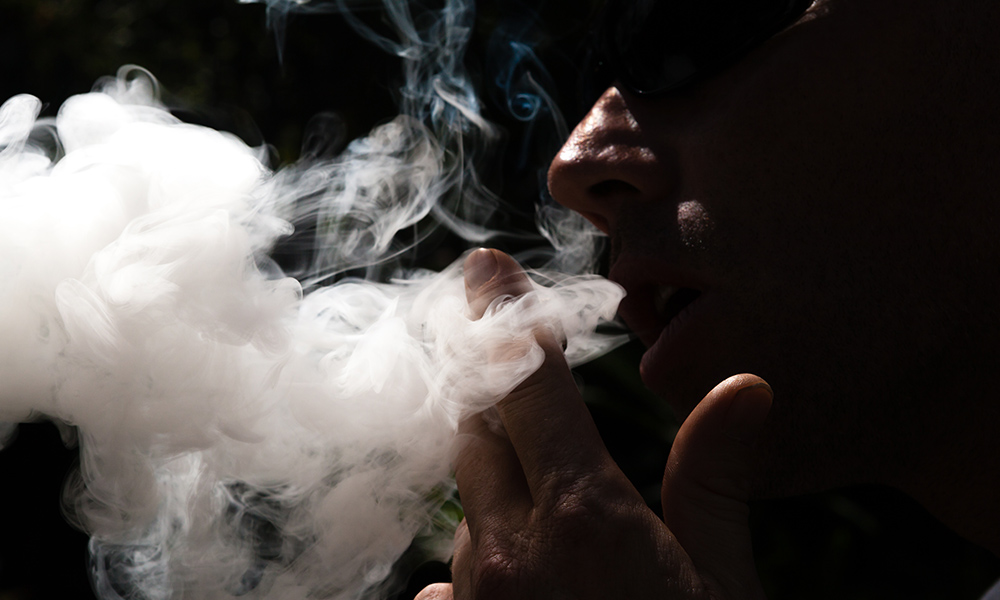 Although cannabis is often associated with relaxing, mellow effects full of smiles and laughter, in certain situations, depending on the intensity of the strain and the tolerance of the user, the herb can bring on some unwanted vibes in the form of a full-blown panic attack.

It is the kind of scenario that typically plays out in a social setting, where a group of bright-eyed cannabis enthusiasts brimming with curiosity have been experimenting with the current powers of pot. Everyone in the room is smoking popular, high-THC strains, like Blue Dream and GG #4, eating cannabis edibles without regard to the recommended dosage and maybe even sipping on cannabis cocktail — a real gang of go-getters.

It doesn’t take long before all of the life in the room is stoned to the bone. It feels good to be alive in a world where weed is legal. But then, all of sudden, one of the newbies in the group cries out in horror from over in the corner, behind the plastic fern, screaming, “Guys, I can’t breathe…I can’t $*%#%*& breathe,” followed by some incessant babble about how they are going to swallow their tongue if someone doesn’t get in the kitchen find them some Benadryl.

In a matter of seconds, the individual, driven by dread, goes frantically searching for a trapdoor to the outside world in an attempt to either grab some fresh air or hurl themselves into the arms of the sadistic gods that allowed them to get this high in the first place. They might even scrawl a makeshift Last Will and Testament on their forearm, as they have likely become more than convinced that the end is near. This type of outburst is straight out of the first chapter in the unwritten playbook of pot. It is what’s referred to as a canna-panic (cannabis induced panic attack), a frightening, non-life threatening side effect brought on by overzealous cannabis consumption.

What Are Cannabis-Induced Panic Attacks?

Cannabis-induced panic attacks are real, but they really only affect inexperienced users. But when the hammer comes down, it comes down big time, leading the distressed down a rabbit hole of fear, regret and countless negotiations with a higher power in exchange for never, ever smoking weed again. These attacks are often accompanied with a variety of symptoms, including rapid heartbeat, extreme paranoia and tunnel vision. Someone on this wild ride might grip their chest and proclaim, through a cornucopia of obscenity, an inability to breathe or even see straight. But they are not having a heart attack or suffering any other fatal bodily malfunction. All this amped-up anxiety really means is that the user got too high for their own good.

Although these panic attacks are uncomfortable, and in many cases even scary, there is absolutely no way that an individual will be dragged to the Gates of Hell from all of the horrific highness they might experience. We’re not going to lie and say that it isn’t possible for those folks plagued with a severe case of canna-panic to perceive the world as a very dark place, where they and they alone have been left to battle it out through several hours of mind-bending intensity and sheer hopelessness. But they will live to get high another day.

What Can I Do If This Happens To Me?

While it might be easier said than done, the best course of action in this situation is to just try and relax. Finding a quiet spot to chill out for a while, perhaps welcoming in the comfort of a friend is really about the best a person can do to deter focus from the gripping nightmare. If sleep is possible, they should do that for sure. Consuming CBD-only products is also a good move. But whatever no matter what don’t call 911. This will only complicate matters.

Calling in the cavalry is a common overreaction when an individual experiences a full-blown freak out from weed. But there is really nothing that the cops, EMT’s or hospital staff can do other than maybe dole out a knockout dose of a prescription sedative. What’s worse is if this panic attack erupts in a state where marijuana is still prohibited by law, that 911 call could end up getting someone arrested. It is better to deal with the unfortunate circumstances and do everything possible to make sure it doesn’t happen again.

How Can I Prevent A Cannabis-Induced Panic Attack?

Moderating cannabis consumption is a solid start, especially if the individual is prone to anxiety attacks. For someone like this, a low-THC strain is probably the best option. Perhaps staying away from edibles is also for the best. The effects from these sneaky little devils can come on slow and get pretty intense. The microdosing of cannabis products is also advised.

In the end, it is always wise to exercise a little common sense when experimenting with marijuana. There is absolutely no shame in starting out with a conservative dose and finding out what works best. After all, you don’t want to learn that you are susceptible to panic attacks after going all Bob Marley in the middle of a 420 event.

You may also like...
Related Topics:anxiety, Cannabis, Panic attacks

Marijuana Is Good For Insomnia, Bad For Dreams
Does Cannabis Cause Psychosis: Coincidence or Causation