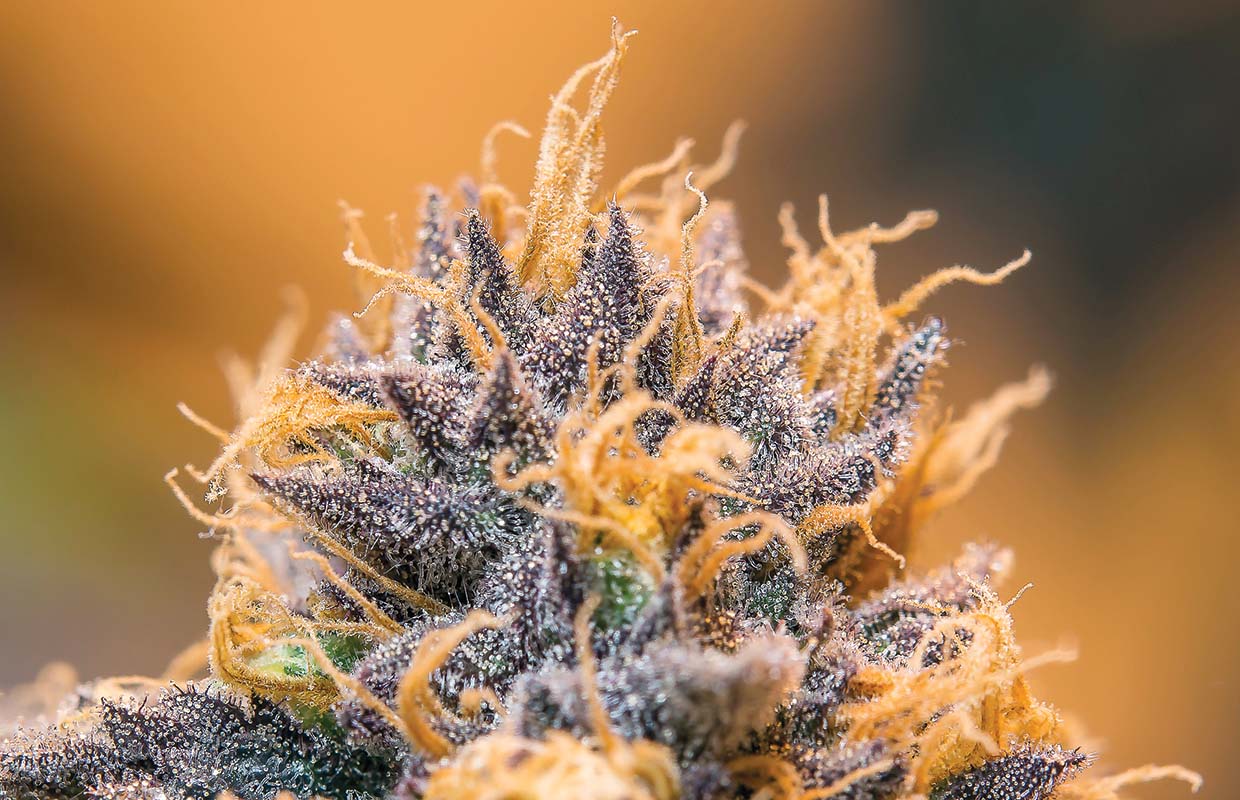 A longtime hitter in West Coast dispensaries, God’s Gift is an homage to when purple was king and people were trying to figure out how many different purple cuts we could get.

The story of God’s Gift definitely started a bit with the particular genetic line we’ll cover here. From California’s Emerald Triangle, to Los Angeles, to everywhere in between, growers have named various strains “God’s Gift.” So narrowing the exact lineage of a cross of two of the top five strains of the past 20 years can be tricky. Various versions of Kush and Purple have resulted in many great strains, like the Cup-winning Purple Kush lost in 2011’s DEA raid on Oaksterdam University. But without a doubt, BC Bud Depot and Scorpion Crews’ incarnation of God’s Gift is most associated with the name. Both original parents selected by BC Bud Depot were part of a partnership with Scorpion Crew, based out of Orange County. The OG selected for this incarnation of God’s Gift was a fabled OGbx4 cut, meaning it resulted from the fourth stabilized generation of OG Kush being back crossed with the original. This version of OG is believed by some to be the parental line behind San Fernando Valley OG Kush in particular, widely considered amongst the best versions of SoCal’s signature strain.

As for the purple strain’s source, Scorpion Crew reports sourcing it at a long-forgotten Bay Area concert, where they smoked with a master cultivator, and received a cut of his Purps. This was at a time when the Bay Area was awash in elite Purples like legendary Mendo Cream.

After a year in development, the collaboration produced what has to be one the top pairings of OG x GDP ever done. It in turn, ended up winning Canada’s prestigious BioCup, and a legend was born.

Today, you can still find elite cuts of the strain, as well as God’s Gift extracts. The strain’s long trichomes and rich oil content make for beautiful kief, dry sift, and bubble hash. Petro-solvent extraction is often less ideal, as Purples tend to do poorly as shatters, but can be good in budder or wax form. God’s Gift will be a bit denser than many of its Purple sisters. Much of the time it will be represented by trichome-soaked popcorn bud from the heavy branching, but the colas are absolutely to die for. The visual of the final weeks of the flowering period is gorgeous on strains with this kind of deep purple.

God’s Gift has an aroma that’s fairly unique in the purple world. The pine scent of the pinene isn’t quite as strong as a Purple Kush (Hindu Kush x Purple Afghani), but that’s about the only one. While your nose is being tickled by the kushiness, the robust grape flavor of myrcene will fill your sinuses assuming the grow and cure are pulled off right.

Dense, and resinous yet giving in a grinder. Really nicely dried and cured God’s Gift will have a little give in it, unlike more modern Purps crosses — which can feel like fused rocks.

Flavor was just as important as potency in the Golden Age of Purple, and any good version of God’s Gift will bring you back to the good old days. Expect a pinch of scratchiness you’d want to see in any good Kush with a fruity sweet overtone that isn’t quite as purple-tasting as a good Erkle, but you won’t need to be an expert to grow it.

It isn’t complete couchlock, but it’s best to keep moving and grooving. God’s Gift will make it very easy to relax and melt a few hours away if that’s what you’re looking for. OG and Purple blends in general are always a bit more functional than your standard Erkle crosses. This leads to much of the deep narcotic effects of the myrcene interacting with the THC, without the heavy eyelids.

Indica hybrids like God’s Gift have been found to be effective for various conditions including nausea, insomnia, and a variety of anxiety disorders. God’s Gift will act as an excellent gatekeeper for those entering the world of high end indicas. Folks using God’s Gift on a daily basis while functioning in society are often using it as a treatment for chronic pain conditions.