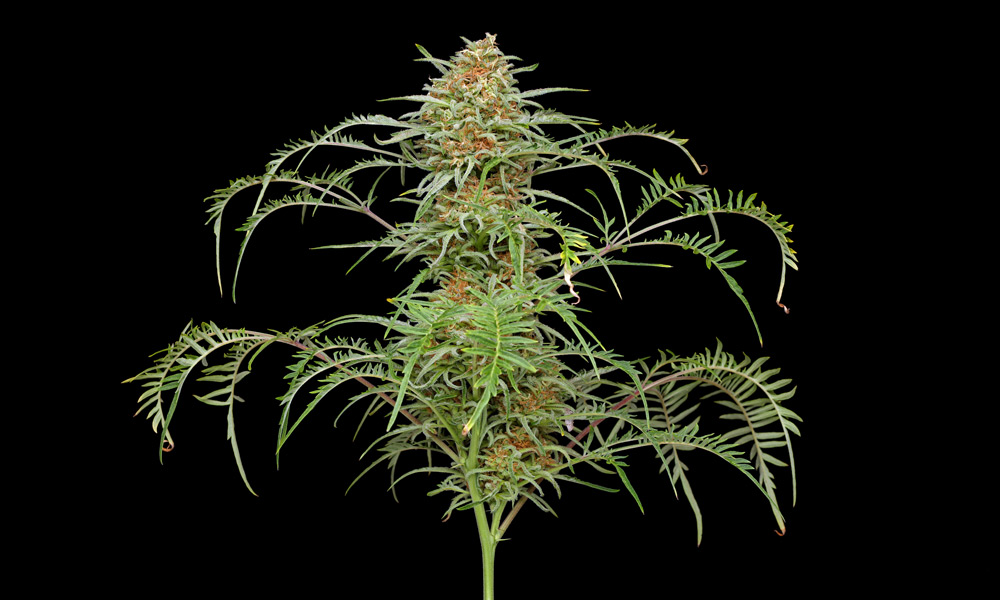 About six years ago, Jordan was approaching his 40th anniversary as a cannabis grower. He believed he was through — ready to quit a lifelong hobby and ready to liquidate a priceless (and, as it would turn out, wholly unique) seed bank, the product of decades of careful labor — because he was bored.

It wasn’t that the self-described “hillbilly,” whose last name Cannabis Now is withholding at his request, didn’t love weed. He’d had his first hit before he was a teenager, started collecting seeds at 17, and started sprouting huge trays, producing hundreds of seedlings, shortly thereafter. What Jordan didn’t love was what had happened to weed: It wasn’t weird anymore.

Jordan is an autodidact. Beyond cannabis growing, he also taught himself motorcycle repair, garment production, battle-ax construction and year-round permaculture — all useful skills when you live off-grid somewhere in rural California near Yosemite National Park, as Jordan has done for 39 years. Through his self-driven study of cannabis growing, Jordan had seen hints of what the cannabis plant could do. And it was much, much more than everyone else involved with the plant seemed to know or care about. He’d seen the freaks and the weirdos — like the “dwarf plants” no more than three feet tall at maturity, or the plants producing buds on the petioles — and he’d seen what happened to them, discarded, weeded out in favor of something predictable.

Judging cannabis based on expedient looks — bag appeal, or grow-room appeal, whatever you call it — “is such a mistake,” he says. And yet, because of market pressures or because of prohibition, predictability became de rigueur.

With legalization looming six years ago, it also seemed there wasn’t much room for weird in the cannabis industry. Just more homogeneity, more conformity. Companies touted themselves as “the Apple Store of weed,” the “Uber for cannabis.” That meant, maybe, as a grower who’d never done more than “medical cannabis patient numbers,” there wasn’t much room for him. Considering that he’s a lifelong lover of sativas and other narrow-leafed tropical-bred cannabis plants working in an era that prized Afghan-ized broad-leafed indicas, maybe that was always the way.

Doubts, boredom and a looming exit were the shadows flickering on the wall of his mind when Jordan set to work on his latest breeding project. He was attempting to stabilize a particular terpene profile, crossing a mother bred from the strains Big Bud and Skunk #1, with a male plant stemming from Big Sur Holy Bud and Banana Kush, when the plant decided it was time to act out.

It was time to get weird. It was time for Freakshow to make its grand entrance.

In his decades growing, Jordan had already seen some phenotypes produce bizarre, out-of-the ordinary mutations. He says that it wasn’t too rare, but also not too normal, to see mutations in the leaves: serrated leaves so deep that they reminded him of a wood saw or alligator teeth. One of these phenos from the above-mentioned cross, however, produced not only deep serrations, but also extra leaflets — not two or three on top of the usual seven, but “a crazy amount of extras,” he recalled, enough to support a millipede. Intrigued and encouraged, Jordan did the opposite of what you’re “supposed” to do: He threw out all the normies and kept breeding the freaks. He sprouted hundreds of seeds — how many he can’t recall.

“I had never taken time to sit there and try to create a mutant,” he said. “But once I did, it was working… Maybe I got kind of lucky. You can say that for a fact.”

He can say that, because the fact is that a mutant appeared: A cannabis plant with serrated leaves so long they almost look like ferns. He named the plant Freakshow, which has leaves so long they almost look like the cannabis plant has developed arms, like the plant is trying to reach out and grab your attention, give you a hug, or smother you in its embrace.

“When I first saw that, it was, ‘Oh man, what have I done?’” Jordan recalled. “That was the moment. I knew right then and there that nobody had ever seen this before.”

A quick Instagram search revealed he was right. Jordan’s son, active online, started circulating photos of Freakshow. Weedheads around the world reacted with disbelief and anger. Surely this was a hoax. Surely this was a Photoshop job. No plant looks like this.

More photos — several generations’ of Freakshow worth — revealed that, no, this was a real plant. Soon shock turned to awe turned to envy. Growers around the world wanted Freakshow for themselves. And now, they can have this rare cannabis in their collection, thanks to a chance encounter with Nathaniel Pennington, the founder and CEO of genetics outfit Humboldt Seed Company.

By the time he crossed paths with Pennington, Jordan had pulled off the other trick of a cannabis breeder: Having “discovered” Freakshow, he’d also “tamed” or domesticated it. He’d breed enough generations of the plant so that its genetics were stable, or stable enough so that when a Freakshow plant produced seeds, those seeds would also reliably produce more Freakshow. Meanwhile, Pennington was running a massive genetics search, what he called the phenotype hunt. He hadn’t yet heard of Freakshow — he was after some other genetics that Jordan had developed — but when Jordan’s kids approached him and told him about this really weird plant, Pennington was intrigued. At the next meeting, at a small cannabis cup event prior to the passage of Proposition 64, Jordan himself appeared — and brought with him a living example, a small Freakshow in a pot.

“Immediately a light went off,” Pennington said. “‘Oh my gosh,’ I said. This is the most unique thing I have ever seen in my life.”

Even better than the weird “random stubby leaves” is the fact that Freakshow actually produces nice buds. It’s also a tough plant, able to do well in regular garden conditions or on the darker side of a house, Jordan and Pennington say.

“It literally could be classified as brand new,” says Jordan. He’s already coined a term (and filed for a United States patent) to classify the plant: Not indica, not sativa — but cannabis monstra. He says it could be the genetic foundation for a whole new breed of plant, a style of ornamental cannabis that you’d pick up at your local nursery.
Classifying the plant, and clarifying whether it qualifies as a subspecies of cannabis sativa or something else, is a job for the nerds and the scientists. More pragmatically, just because a plant is weird and cool doesn’t mean it will “survive” in “the real world.” Even though Freakshow was available, would anyone want to buy it?

Freakshow had what you could call its coming-out party at the Emerald Cup in December 2019, and the results were promising.

“We had a line out of the door to the Great Pavilion,” Pennington said of the thirst for Freakshow seeds. “We had people fly in all the way from London.”

And there was Jordan, signing seedpacks from total strangers who came an awful long way to find the mad genius behind this really freaky pot plant.

Pennington doubts this is the first time Freakshow has appeared on Earth.

“To be honest, I think maybe nine out of 10 breeders have seen those funky weeds — and then immediately gotten those genetics out,” he said. “I think most are like, ‘Uh oh, what did I do wrong? I’m starting to see a mutant.’”

And Jordan himself tends to agree. In Freakshow, he sees echoes of some of the very first cannabis he ever saw. “The first Thai stick, back in the 1970s, had a lot of these small, little serrated leaves,” he says. Maybe the old sativas of his youth, the plants he always loved, decided to return in his hour of need?

Metaphysics and magic aside, the science behind Freakshow — what produced it and how — is evolving in real time. Humboldt Seed Company hopes to publish studies on the strain, produced in concert with botany PhDs and other plant scientists, Pennington said. In the meantime, Jordan himself has some theories, some of which already seem like they’ll be borne out.

Epigenetics, he notes, is the study of how mutations occur not when DNA changes, but when various genes in the same genetic sequences are expressed or suppressed. Think of it as reaching (or suppressing) inherent potential, sometimes in response to stress, other times in response to chemical exposure or another intervention.

In plant biology, a gene called the KNOX1 affects the shape and length of leaves and shoots. Maybe Freakshow has a suppressed KNOX1 gene?

The Freakshow experience also underscores how cannabis breeding should be approached with a sense of urgency given that the commercial industry might be breeding itself “into a dead end,” Jordan notes. Other plants offer ominous warnings, should we bother to heed them. For example, commercial bananas — the standard yellow fruit that most humans not living in tropical climates consider to be “bananas” — weren’t a thing before 1960, when a fungus ravaged the flavorful Gros Michel banana strain and freaked-out banana growers replaced it with the supposedly hardier, less delicious Cavendish.

Jordan also wonders how much he’s in control of Freakshow, about what the untapped potential of the cannabis plant means for the future.

“It far outdid what I set out to do,” he said. “It made me realize, ‘Wow — as a manipulator of cannabis genetics, it shows you how far we can take things.’”

If You Want to Smoke (Christmas) Trees, Ask Santa for These Strains
The Art of the Modern Cannabis Party