It’s nearing the close of BigMike’s “Haunted Halloween” party — an event filled with all sorts of opulent wonders including bud and dab bars and a stunning buffet — but as I approach the doors of the marijuana mansion to head to one of the restrooms in front of the house, I notice the entryway has been blocked. I look through the glass window in the front door and spot a police officer’s badge and find cannabis author and activist Ed Rosenthal and his wife and publisher Jane Klein standing in the doorway. BigMike, the head of Advanced Nutrients, has become notorious for his larger-than-life persona and his parties edged with scantily-clad young women, Hollywood elite and free flowing cannabis — and it appears someone has called the police on his lavish Hollywood Hills affair and the party is being shutdown. 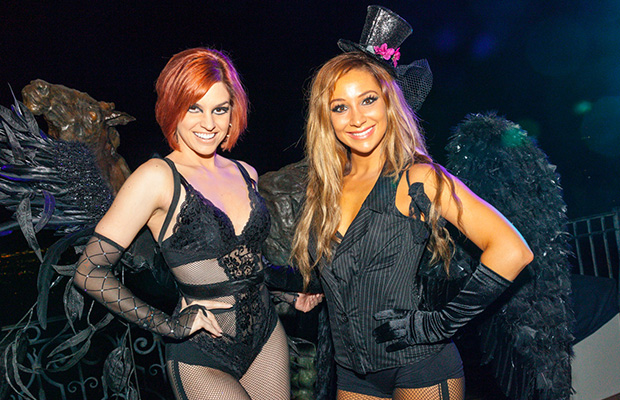 “Ed always likes to be where the action is,” Klein says, as we enter a roped off area that gives us a bird’s eye view of the police activity from a balcony directly above the front of the house.

On the balcony, I notice a spotlight is shining on the house from a police helicopter that hovers overhead. Two women dressed as two-headed Victorian ghosts have left their post on a swing set above the front door and Rosenthal is defiantly puffing a joint and taking photos of the uniformed officers, a group that numbers about eight in total. Other party-goers out front seem undeterred, picking up gift bags and continuing their conversations despite the law enforcement infiltration. When the officer count grows to more than a dozen, our group follows the action out to the back of the house. The officers are on the stage, where Grammy Award-winning artist Everlast played a full set earlier in the evening, and look like they might be making an announcement. The music has been shut off but people are unfazed, continuing to mingle and fill up plates near the hot buffet line. The officers then begin shining their flashlights around as they attempt to herd people out to leave. Instead, they hear a litany of jokes at their expense. 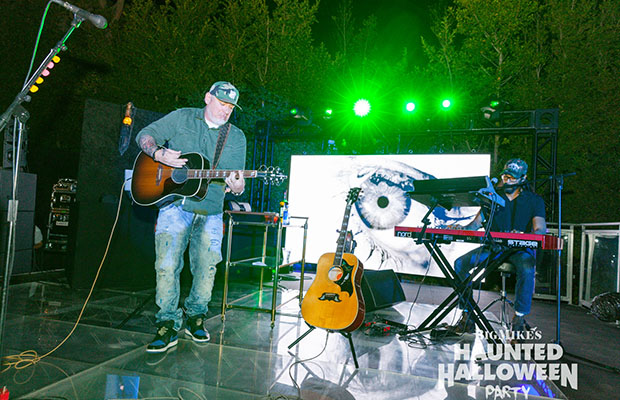 Everlast performs at the marijuana mansion. An ice bar shaped like a coffin displays seafood offerings. Patty-goers enjoy a drink and a smoke at the Halloween event.

The law enforcement presence seems excessive to say the least (if you can’t host a party at a huge private estate, where can you host it?) and I take the opportunity to also pester the cops who are doing their best to terrorize guests who are simply having a good time.

“Did we smoke too much weed?” I say to an officer, who just laughs and gestures for me to step inside.

As I’m eventually brought into the main room of the house, I notice the sushi chefs are still crafting hand rolls laid on on giant sushi boats. People are also still grabbing king crab legs and oysters off of the ice bar and taking  photos. I find myself at the bar, which is decked out with candy near a giant Halloween cake designed to look like the mansion and a watermelon sculpture craved out with joints and the word “dope.” 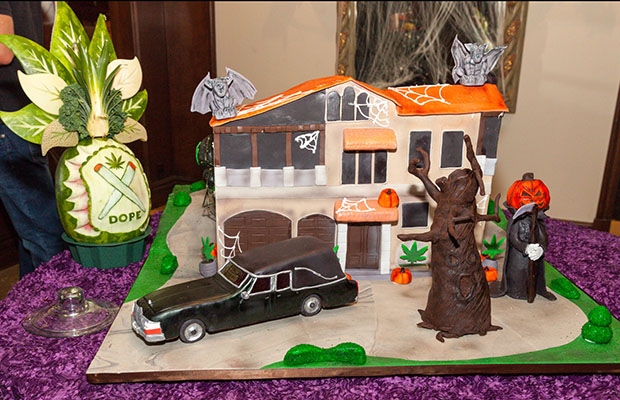 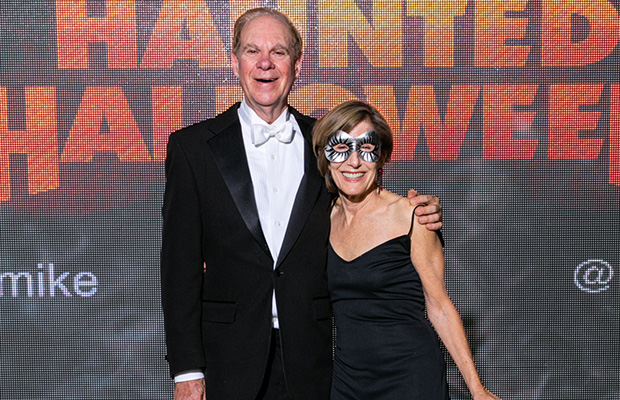 When I arrived at the Advanced Nutrients event, everything was incredibly organized, as attendees met at one of several parking lots and were driven up by a cadre of black SUVs. Now, however, with the police chasing everyone out of the mansion, the party spills out into the streets in a disorderly fashion and the scene becomes becomes a chaotic mass of people calling cars to go home. My crew miraculously manages to jump on one of the original SUVs and heads back to the parking lot where we’re able to get a rideshare in a much more orderly fashion.

“Well, that was quite a night,” Klein says, as the car rolls around Mullholland Drive back into the more populated area of the city.

BigMike spared no expense for the lavish party, which began with a meet-and-greet with Lt. Gov. Gavin Newsom followed by a networking hour. A highlight of the evening included the presentation of Maverick Awards to an array of movers and shakers within the cannabis industry. When accepting his award, Rosenthal — decked out in a hand-embroidered marijuana tuxedo — expressed his gratitude at receiving the recognition. 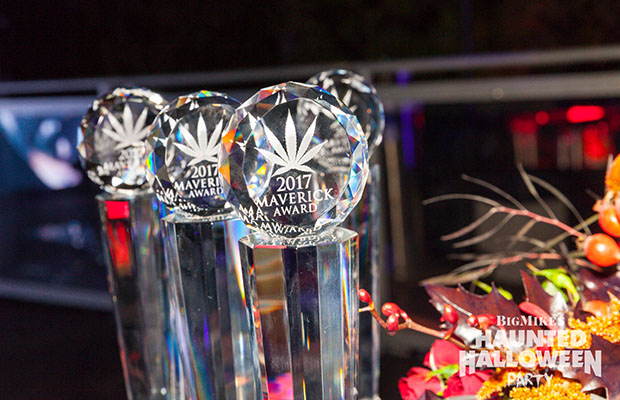 “This whole event is magical,” Rosenthal said, before closing with his signature dry humor. “Thank you so much. I really appreciate it. I’ll try harder.”

Other Maverick Award winners included Dr. Dina of AHHS Weho, Dave Crockett of Crockett Family Farms and Steve DeAngelo of Harborside Health Center. Once the award’s presentation was complete, the event blossomed into an all-out Halloween bash complete with aerialists and costumed performers designed to frighten guests. In between the networking hour and the beginning of the party, BigMike changed into a king’s outfit and took photos in front of a step and repeat banner themed-out for the event. It’s in that photo area that I spotted Harry Resin and his wife arriving at the affair. Resin, who is endlessly fashion-forward, was wearing a pair of Yves Saint Laurent zebra-striped pants and, as I joined the circle, began to compliment Dr. Dina on her consulting work with the Netflix series “Disjointed.” Dr. Dina then introduced one of the characters on the show, Dougie Baldwin, who plays a grower. 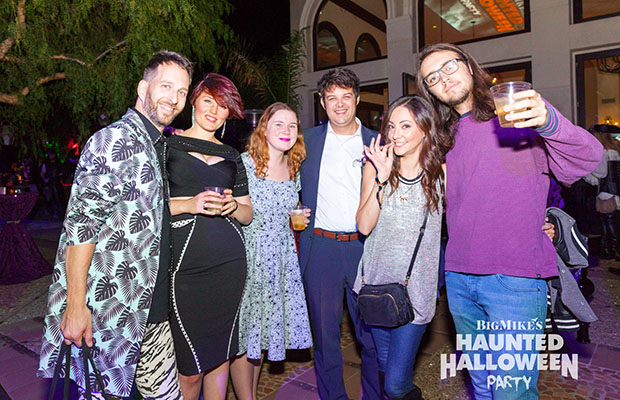 Harry Resin and his wife, the author and her husband, Dr. Dina and Dougie Baldwin.

I am that annoying person who, when I later spotted Baldwin at the dab bar, pointed it out aloud and said, “Hey, you’re the guy from the show and you’re taking a dab!”

The party (unarguably the best Halloween party I could ever hope to attend) was mostly filled with cannabis celebrities, but at a certain point UFC fighter Chuck Liddell arrived with a posse and garnered plenty of attention. 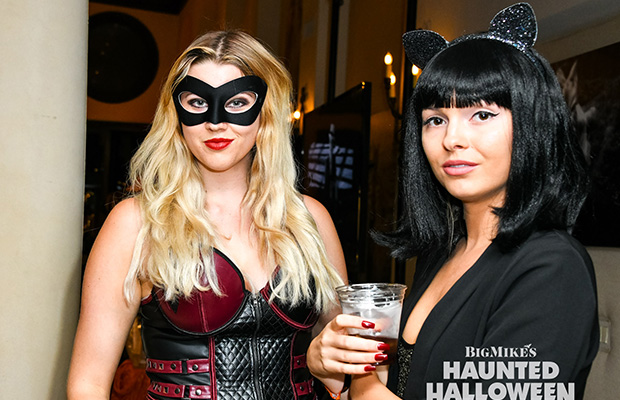 A sampling of the amazing costumes on display at the party. The bud bar was located within a vine-terraced gazebo on the lawn, which boasted views of both The Valley on one side and downtown LA on the other. The budtenders — women dressed in skin tight skeleton suits — served an array of cannabis that they stuffed into pre-rolled cones. The selection included Blue Dream, XJ, Tangerine and Cookies and Cream. In addition, the dab bar located around the corner had a choice of sauce or shatter. Of course, there were also multiple bars and the drinks were free-flowing and revilers partied into the night. While it was a big affair, no one was out of order and the crowd remained in a mellow mood (making the late night arrival of the police officers and helicopter an unexpected addition.) Party-goers take photos in the step and repeat area. Advanced Nutrients products on display at the party. Within the party there were also cannabis plants on display, showcasing the Advanced Nutrients line of cannabis nutrients. The company is reportedly the top cannabis-specific nutrient line in the world, with over $90 million in sales a year across 93 countries. For many, receiving an invitation to a party at the marijuana mansion is a once-in-a-lifetime opportunity. BigMike quite obviously wants others around him to share in his success.

TELL US, who would you hope to see at an exclusive Hollywood Hills mansion party?