I’m standing on a ridge overlooking the once mighty Sacramento River, now fettered by large dams at almost every turn and tributary. A gaggle of Canadian geese meander along the grassy, rolling hills lining my vantage point, honking at each other casually as they pass me by.

I exhale with a grin, taking in the warm sun and letting out a massive cloud of blunt smoke. The taste is exquisite — an unrestrained rush of diesel and pine that tantalizes my tastebuds and tickles my lizard brain.

I’m in Sacramento to check out the California capital’s sesh culture, and I couldn’t have picked a better guide. Remy Gwapo, the mastermind behind the City of Terps sesh, lives and breathes Sacramento cannabis culture and he’s intent on showcasing the best his city has to offer.

“That right there is the flaming rage of Sacramento right now,” Gwapo tells me as he motions toward the blunt as I hit it again and reluctantly pass it back. “My boy from Khemtrail Farms grows it. “It’s called Epoxy.”

The powerful effects of the Epoxy, a Gorilla Glue, Larry OG cross, kick in almost immediately and by the time the blunt comes back around to me I’m already feeling a pronounced sensation of tranquil euphoria. I eagerly inhale from the natural tobacco leaf-wrapped monster blunt, which contained at least three or four grams of the Epoxy when Gwapo first lit it, savoring the concentrated flavor and relishing in the captivating impacts of the powerful enhancement of my senses. And at this point, I’m way too lit to drive. Thankfully, I haven’t just come to Sac to check out the local fire and hit City of Terps, I’m also here to experience firsthand a unique dab-oriented service that’s poised to carve out a lucrative niche in the Golden State’s emerging cannabis tourism industry — 710 Limos.

“Let’s hop back in the whip and cruise Old Sac before we hit the sesh,” Gwapo says with his signature blend of laid-back positivity and an unhinged enthusiasm that the Bay Area lovingly calls “hyphy.”

He motions towards a licorice black Cadillac limousine idling nearby. A chauffeur in snappy formal dress holds the door for us as we hop in the back seat of the spacious, stretch limo fully equipped for avid terp nerds and dab fanatics.

I bite my tongue to avoid weeping with joy when I lay eyes upon the practically bottomless assortment of concentrates, the rig collection representing the entire spectrum of current 710 technology — from e-nails to heady glass rigs paired with butane torches — and the bar, fully stocked with cannabis syrup, sodas and ice.

There is absolutely nothing missing from the “710 experience” promised by 710 Limos, which is a cooperative venture between Gwapo and his partner, Jerry DeMilo.

If Gwapo is the “710” in “710 Limos” (and he surely is) then DeMilo is the “Limo.” His family has been in the livery car and limo business for several generations, and he’s been working in the industry his entire life. He says the idea for 710 Limos grew organically out his longtime friendship with Gwapo and their shared passion for all things cannabis.

“I won’t lie, at first I was somewhat hesitant about the idea because of the certain degree of legal risk involved. But at this point I’m confident we’re operating within the law,” DeMilo said, pausing to take a dab from tan e-nail rig. “But now we’ve got it all worked out and we’re operating within the law… the limo end of the business is run completely separately from the cannabis concierge end of things, which is really what Remy does.” And that is definitely true in my case — Gwapo makes sure I sample a little bit of everything and offers me some insight into the “inside baseball” of the cannabis industry in Sac while we cruise its streets in stoney style. In all ways he and DeMilo are the consummate hosts, which of course is their business, one they seemed poised to dominate as the state readies for a recreational vote and more and more cannabis craving tourists pencil a visit to California on their bucket list.

We arrive at the City of Terps sesh and I dive right into the impressive concentrate samples being offered by the dozen or so vendors present. I feel an infectious energy that’s sometimes lacking from the more sedate seshes I attend, something more akin to the feeling right before a concert starts. A kind of anticipation, like the entire crowd can feel the precipice of history the entire 710 scene is perched on right now, the delicate balance of culture and law keeping it aloft. 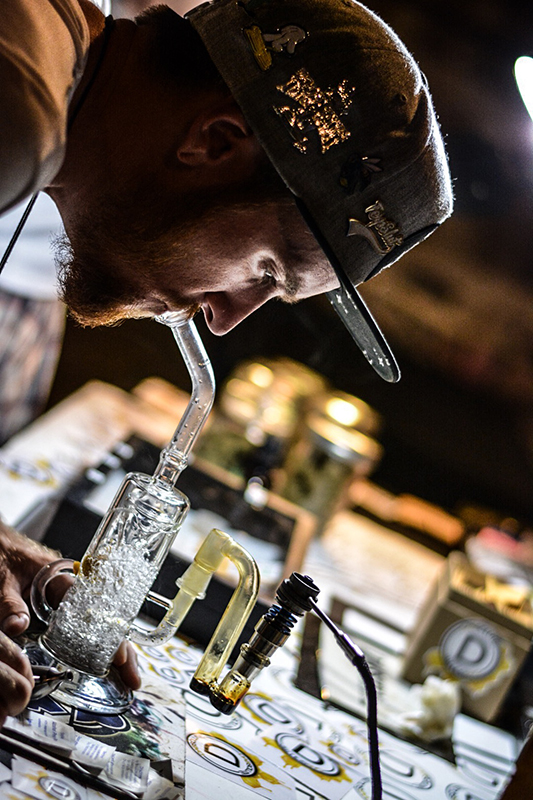 And then I do something I never even considered doing before; I “compete” in a Biggest Dab contest. It’s hard to explain what possessed me to do this. They had three grams of a wild concoction of concentrates: shatter, wax, clear, and maybe some other powdered crumble or THCa or something. Honestly, I was already pretty high at this point.

The rules of the contest are unclear up until the last moment. There are three contestants on the stage — we proud few dab gladiators, dedicated enough to the hedonistic pursuit of terps to risk public humiliation for a once in a lifetime experience — and three judges; two DJs and Gwapo. Ultimately, they agree on a one gram dab per competitor and a goal of clearing the entire thing in one breath, then speaking into the microphone to prove you are conscious/not in massive respiratory distress.

I go into this with the same motivation for about 50 percent of the dumb shit I do in my life — getting a better story. I tell myself that even though it will be personally humiliating to have a borderline asthma attack and possibly black out and collapse in front of roughly 100 people, it will no doubt spice up the narrative for Cannabis Now readers.

So, with no small amount of trepidation, I take the tool Gwapo hands me and gather up the one-gram slice of brain-melting terp tonic he points at in front of me. I take a deep breath in and grip my right hand superstitiously around the jagged corners of the outsized, silver magen david I’ve worn since my 18th birthday, exhaling every wisp of wind in my lungs and deliberately lowering the glob of concentrate onto the gently smoking nail attached to the “official” e-nail for the contest.

My dab starts to melt immediately, globbing and bubbling onto the hot nail as I gently but quickly fill the rig with dense, milky vapor, scraping the last droplet of errl off the dabber and flipping it over to the carb cap, sealing the top of the nail and my fate.

I use the rest of my lung capacity — roughly two-thirds by my hopeful calculation — and breathe in swiftly, rushing the amplified and condensed vapor into my expanding chest, feeling the familiar sensation of taking a dab augmented to gargantuan proportions.

In what I know is the moment of truth, I remove the cap, clear the residual vapor and breathe in a little fresh air to complete my maximum inward breath. I angle my head slightly upward and exhale a huge cloud into the air over the crows of spectators.

I wait for my lungs to burst into flame, knowing any moment I’ll feel a debilitating crush of pain… but it never comes. I pause, reach for the microphone and say some variation of the agreed upon ‘buzzword’ — “Dab or die.”

And not only do I dab and not die, I win the competition, taking home the cup — a plastic “po’ up” cup filled with assorted paraphernalia and samples, as if this night hasn’t given me enough already.

And as the evening winds down and I pour up my last cup of cannasyrup, I don’t worry about being “too high,” which I undoubtedly am by both California and Nature’s laws, because my 710 Limo is idling outside, ready to carry me back home and provide me with more dabs that I almost certainly don’t need but simply can’t resist.

Have you tried cannabis concentrates?

You may also like...
Related Topics:710, Cannabis, concentrates, dabs, sacramento