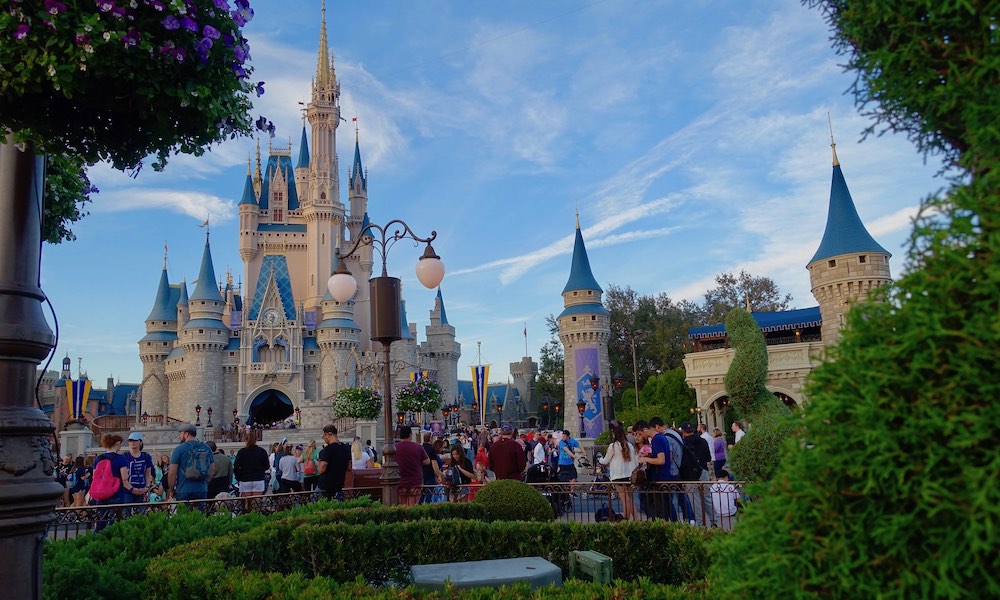 In April, Hester Burkhalter joined her family for an adventure to “the happiest place on Earth.” But the 69-year-old grandmother from North Carolina soon found herself in the back of an Orange County Sheriff squad car over the doctor-recommended hemp-derived CBD oil she had in her purse at the Walt Disney World Resort.

Prosecutors recently dropped the case against Burkhalter and she is now giving her side of the ordeal. On Tuesday morning, Burkhalter gave a press conference — flanked by her family and attorneys Ben Crump, Michelle Rainer and Jennifer Cinnamon — in Orlando to announce her intent to sue Disney and the Orange County Florida Sheriff.

Crump told the gathered media that the lawsuit was about “the treatment they placed on this church-going, law-abiding grandmother who was only coming to the Magic Kingdom to give her family, especially her children, their dream vacation. And it ended up turning into a nightmare.”

Crump said the lawsuit is specifically on the grounds of illegal detainment, false imprisonment, defamation of character, the intentional infliction of emotional stress and violations of Burkhalter’s civil rights.

Following the passage of the 2018 Farm Bill last December, hemp and its derivatives — including CBD — were removed from the Controlled Substances List. However, the FDA has yet to release its regulations regarding how hemp-derived CBD products will be treated, which has caused widespread confusion for police departments nationwide.

“When you hear how an off-duty sheriff employed by Disney treated her, a grandmother, a great grandmother, who has never committed a crime in her life. When you hear how rude, mean, and unprofessional he was to her,” said Crump, who insisted Burkhalter had complied completely with any and all requests that security and law enforcement asked of her. “They had nothing to hide. They weren’t trying to do anything nefarious. The only thing she was trying to do was get relief from the pain.”

Crump said what Burkhalter had in her possession was hemp-derived CBD. Crump noted that, prior to the press conference, he walked into a local Orlando store and purchased CBD oil over the counter without a problem. Crump made the dramatic assertion that everyone flying into Orlando should receive the message that, if they have CBD, “you may suffer the humiliation and the outrageous conduct by Disney employees.”

Crump said those employees detained Burkhalter for over two hours and she was put in handcuffs in front of her children. From there, she spent 12 hours in jail. “Why? Just because she needed pain relief and the doctor didn’t prescribe her opioids,” said Crump.

Rainer, another one of Burkhalter’s lawyers, spoke against the probable cause affidavit the police had filed for Burkhalter. She said she had never seen a standard operating procedure that would allow the off-duty officer working for Disney to work in the way he did in executing the arrest.

Rainer went on to note another problem: the field tests that law enforcement across the state of Florida use can’t accurately discriminate between hemp derivatives and THC. “So it’s always going to test positive. The only way to be able to know the difference between CBD and THC is to send it to the lab,” said Rainer, “You had a security personnel officer who knew full well that it was not THC, who knew full well that it was CBD, you had an off-duty sheriff’s officer decide to ‘act now’ in his official capacity, and effectuate the arrest. He signed the probable cause affidavit.”

Rainer said it was interesting that Disney World has yet to comment on the situation and the sheriff is now claiming the arrest wasn’t illegal, but admitting the police shouldn’t have done it that way.

Crump chimed in that the state attorney dropped the charges because they felt the arrest was inappropriate.

Jennifer Cinnamon served as the lead criminal defense attorney for Burkhalter. Like her peers, she noted how strange everything looked right off the bat, before she even met Burkhalter. She said she was thankful she was able to get Burkhalter’s charges dropped, and thankful her fellow attorneys would be able to help her find justice.

How Burkhalter Was Arrested for CBD at Disney World

Burkhalter took the microphone, saying she just wanted to explain herself to everyone what happened. Her family had planned the trip for a couple years and previously postponed it due to her husband having three heart attacks in the last year and a half. He was in the hospital a month prior to the trip.

She said the first day of the trip was all smooth sailing. The family visited the Animal Kingdom and Hollywood Studios. “They didn’t say anything that day,” said Burkhalter. “And then the next day, we went to the Magic Kingdom and that’s when they stopped me at the check-in.”

Burkhalter handled the security checkpoint like she had the previous day, putting her purse on the table. But this time a few people came over and started going through it. After a while, she asked if there was a problem with her purse.

“After a while, they called an off-duty officer over, he wasn’t a very nice person,” said Burkhalter. “They told me what they were going to do. And I walked over to the car and he handcuffed me.”

Burkhalter said that she told the officer she couldn’t ride in the backseat. Burkhalter believed she had some kind of incident due to the stress of the situation and she requested an ambulance which the officer denied. She stood next to the car and began vomiting. After that incident, they let her ride in the front.

“He just wasn’t a nice person,” said Burkhalter. “I have all respect for the police department. We have friends in our church that are police officers.”

Crump said Disney needs to take ownership of its CBD policy and training of their employees. Crump closed noting again that Disney has been completely silent on the matter.

“They cannot remove this humiliation, a mugshot — she has been arrested now,” Crump said. “She was in handcuffs. Her children were crying while she was crying. And a Disney employee didn’t seem to care at all about how he was treating this family. That’s what Disney has to account for.”

A reporter asked if there was anything Disney and the county could do to keep the lawsuit from moving forward. He said yes, if Disney were to sit down with the family and repair the harm that was caused.

As for the sheriff, they’ve apparently instituted a new policy to have officers call their legal department before making any CBD arrests. Burkhalter’s legal team all pointed to that as further evidence of the wrongs she experienced.

TELL US, did you know you could be arrested for having CBD oil?